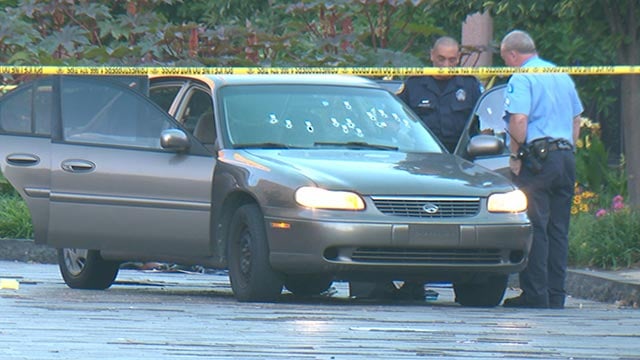 Yesterday a uniformed black police officer in St. Louis was ambushed by four black males while he was sitting in his personal vehicle. They fired several shots through the windshield, hitting the office once in the torso. Fortunately he was wearing his bulletproof vest so he was relatively uninjured.

KMOV – A male suspect is in custody and being questioned in connection to the shooting that injured a police sergeant Tuesday morning in the Central West End, police said.

The 39-year-old sergeant was working department-approved secondary in the area of North Euclid and Maryland when the shooting occurred just before 5 a.m.

The sergeant was in his full uniform and personal vehicle when he saw two individuals walking down the street. Chief Dotson said the sergeant did not bother the individuals but saw them walking in the area a short time later with a third person, he monitored them again and did not exit his vehicle.

Shortly after the individuals walked past a second time, the sergeant observed the suspect vehicle approach him with four people inside, including the three he saw walking in the area earlier. The suspect vehicle pulled directly in front of the sergeant’s vehicle and one of the passengers exited the front side, with a bandana over his face, and began firing shots at the sergeant, who was still inside his vehicle, Chief Dotson said.

After the suspect fired shots, the sergeant returned fire. The sergeant told authorities he believes one of the suspects may have been struck by his gunshots.

The suspect vehicle began leaving the scene and the suspect who fired the shots ran on foot. While in his vehicle, the sergeant followed the suspect that was running on foot but lost him after he entered a parking garage on York, Chief Dotson said.

“They targeted, they ambushed, they tried to assassinate a police officer,” Chief Dotson said.

After losing the suspect, the sergeant returned to the shooting scene where he tried, unsuccessfully, to locate the suspect vehicle.

According to St. Louis Police Chief Sam Dotson, the officer, who was shot one time in the torso, was wearing a bullet proof vest at the time of the shooting.

The sergeant was released from the hospital Tuesday afternoon.

Sheriff David Clarke responded today to this ambush, saying this is a war on police and the Obama administration is completely silent. Clarke says you have to be blind not to see the pattern here and he’s going to call Loretta Lynch and demand an investigation:

He’s exactly right. This doesn’t fit Obama’s race narrative therefore he is quiet. But that’s what he’s supposed to do according to Rules for Radicals…break the system, and then be silent while it falls apart.