Yesterday we told you about a ridiculous story in the NY Times in which they were pushing their latest conspiracy theory to try and explain Trump’s advocacy of hydroxychloroquine, because it can’t be that he actually wants people to recover from the coronavirus:

"If hydroxychloroquine becomes an accepted treatment, several pharmaceutical companies stand to profit, including shareholders and senior executives with connections to the president. Mr. Trump himself has a small personal financial interest in Sanofi." https://t.co/JSmuvM78aC

If you missed it, the quote in the tweet above is the gist of it.

Snopes decided to take a closer look at the claims and came up with a MOSTLY FALSE rating: 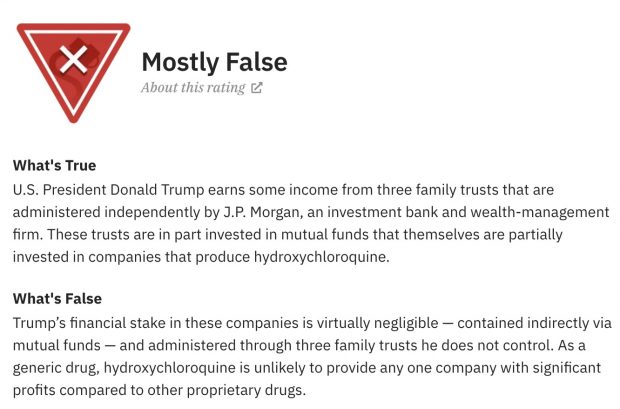 In other words, the only true part of the claim was that Trump has a mutual fund invested in Sanofi.

The rest is false for a couple of huge reasons, as Snopes notes: “Trump’s financial stake in these companies is virtually negligible — contained indirectly via mutual funds — and administered through three family trusts he does not control. As a generic drug, hydroxychloroquine is unlikely to provide any one company with significant profits compared to other proprietary drugs.”

His investments are tiny and he doesn’t even control the trusts! Great reporting NY Times! If you want to read their analysis more in-depth, you can do so here.