Igor Danchenko is being charged with five counts of lying to the FBi. But honestly, he didn’t just lie to the FBI, he fabricated conversations and facts out of thin air.

The indictment alleges that Danchenko knowingly lied about conversations with “sub-sources” that in fact never happened, or came from somewhere else.

Some of the false information in the Steele dossier that came from Danchenko was later used to obtain a surveillance warrant against former Trump campaign aide Carter Page.

Danchenko was arrested and taken into custody on Thursday, according to the Justice Department.

Bombshell stuff. Igor Danchenko received info from a Democratic PR executive that he then passed along to Chris Steele. He withheld that from the FBI. Danchenko also lied about receiving a phone call from Sergei Millian. pic.twitter.com/sFwHkCuiNb

He "fabricated" the allegation that he was given info by @SergeiMillian via phone.

He lied about sources – one being a Democrat party operative/PR exec. pic.twitter.com/GZjqi3y2tj 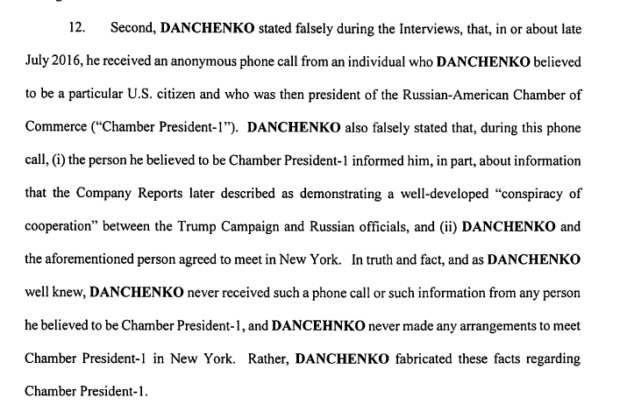 Unreal. Danchenko lied to the FBI in June 2017, and the FBI knew it, but he's only just now being charged. pic.twitter.com/l5zO7QYdk1

One of the other Danchenko/Steele Russian "sources" –

Was expecting to be rewarded w/ a job in the Hillary Clinton State Department.

This is worse than we imagined. pic.twitter.com/zUw3Z8I599

Fiona Hill introduced Danchenko to Chris Steele as well as to this PR executive pic.twitter.com/PYYUBo97hy

So it turns out that Hillary-linked operatives had way more connections to the Russian government than Trump did pic.twitter.com/UCN75NwsM0

Here’s the full indictment for you to read: