After Bill de Blasio and the New York City council voted to defund the NYPD, 49 people were shot and 8 killed this weekend in NYC: 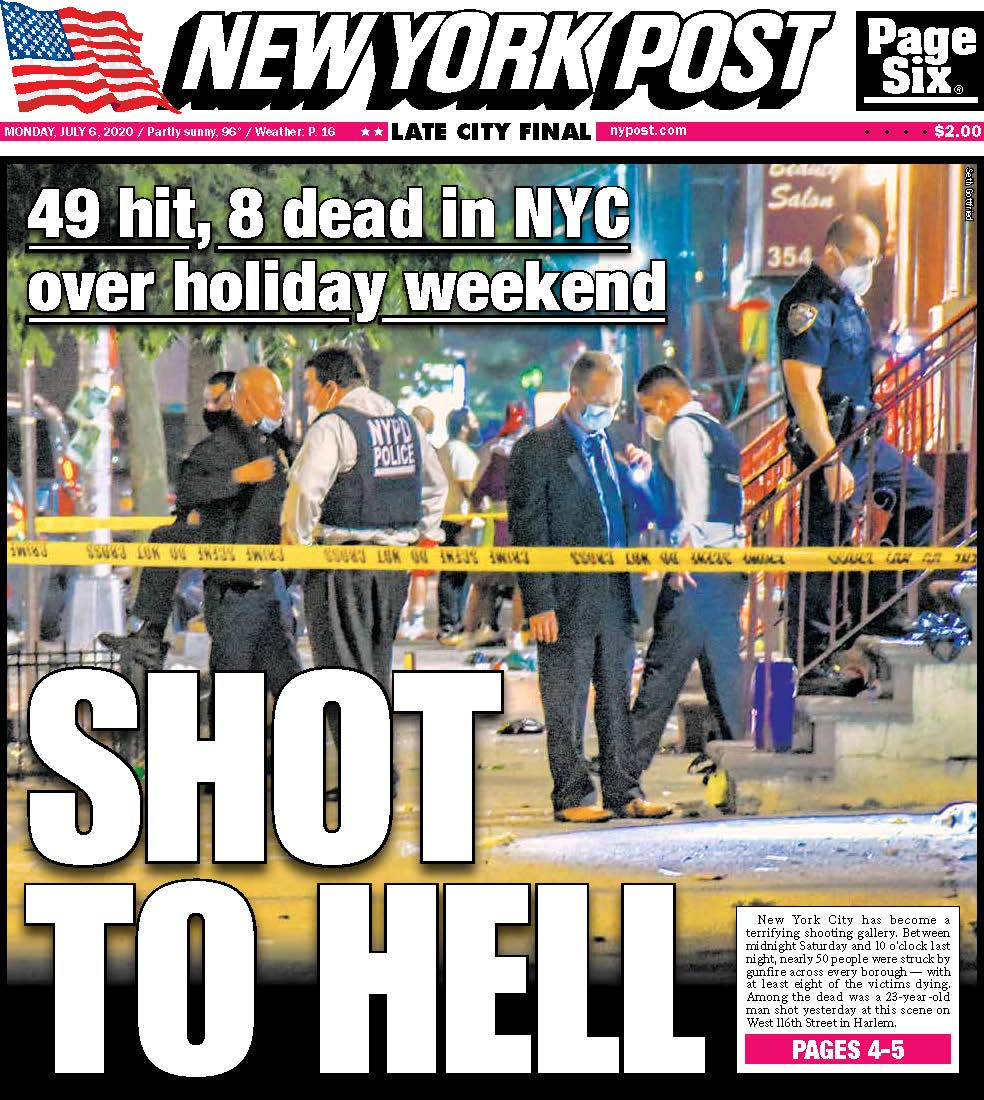 The 4th of July weekend bloodshed in New York City continued Sunday night as at least seven people were shot, five fatally, in a span of about three hours, police said.

The first murder, which police were notified of at 5:47 p.m., claimed the life of a 21-year-old man in Brownsville, Brooklyn, cops said.

The victim was found with a gunshot wound outside a building on Christopher Avenue near Pitkin Avenue. He was taken to a Brookdale University Hospital Medical Center and pronounced dead, police said.

Three minutes later, police received another call of a person shot in the Claremont section of The Bronx.

There, a 29-year-old man was discovered by emergency responders with a gunshot wound to the chest.

The victim was taken to a nearby hospital, where he was declared dead.

At about 6:45 p.m. in Harlem, a 15-year-old boy was shot outside a building on Madison Avenue near East 111th Street, cops said. He was taken to an area hospital and is expected to survive.

The other victim, a 29-year-old, was shot in the arm. He was taken to Lincoln Hospital in stable condition.

On Staten Island at about 8:47 p.m., police found a 45-year-old man shot in the head in a building on Gordon Street in Stapleton, according to police.

The shootings extended a violent weekend in the Big Apple, where 39 people were shot, three fatally, between midnight Saturday and 6:30 a.m. Sunday, sources said.

To quote a detective on Twitter to Bill De Blasio, “How is that 1 Billion in budget cuts working out for you?” Exactly. While BLMers and and their anarchists comrades tear down statues and cities, Bill de Blasio and his city council are busy tearing down the police.

And not just NYC, of course, but other Democrat cities are doing the same. Check out this photo of Minneapolis tweeted by former NYC police commissioner Bernie Kerik:

This is not Baghdad, this is not Mosul Iraq, this is not Falluja and it’s not Afghanistan! It’s Minneapolis, Minnesota, whose Democrat leadership wants to defund the police. Not even sure how much worse it can get. pic.twitter.com/9YEpcolZr1

Who needs police, right? Or do Black lives really matter?