Earlier today a Democrat operative flying alongside Ted Cruz took this picture of him without a mask on and posted it on Twitter:

Captured today at 10:45am — @TedCruz on a commercial flight, refusing to wear a mask. pic.twitter.com/h8DM7J4CMi

As you can see, he’s claiming that Cruz ‘refused’ to wear a mask. He then tweeted the ‘rules’, via American Airlines:

For those asking, this was on an @AmericanAir flight — their policy clearly states that masks should be worn on the flight. pic.twitter.com/CyG1GG5H8n

Notice he says “their policy clearly states that masks should be worn on the flight.” But he ignores the portion of the rules that say “your face covering may be removed to eat or drink.” And if you look closely, Cruz appears to be drinking a cup of coffee.

He also posted this photo of Cruz sitting in an airport to try and drive home his point:

For those trying to argue that he was drinking, it's not hard to have a mask on and undo one side to take a sip then put it back on. Most people take their time drinking coffee.

Also, here's a photo of him sitting outside the gate: pic.twitter.com/C7cbm3pQH0

Well now, according to Fox News, American Airlines is investigating the ‘incident’:

American Airlines is reviewing an incident in which Sen. Ted Cruz was photographed on one of its flights without a mask, Fox News has learned.

“For the well-being of our customers and team members, we require face coverings to be worn onboard, and we expect our customers to comply with our policies when they choose to travel with us,” the airline said in a statement to Fox News. “As we do in all instances like these, we reviewed the details of the matter, and while our policy does not apply while eating or drinking, we have reached out to Sen. Cruz to affirm the importance of this policy as part of our commitment to protecting the health and safety of the traveling public.”

A Cruz spokesperson said the senator was drinking coffee at the time his mask was off. He appeared to be holding a beverage and cell phone when the image was taken.

“To help promote safety, Senator Cruz wears a mask when traveling, and practices social distancing where possible. Consistent with airline policy, he temporarily removes the mask while eating or drinking,” a Cruz spokesperson told The Hill.

There was another picture posted on Twitter of Ted Cruz wearing a mask while on the flight. While he was wearing the same clothes the airplane seat is different, indicating it was probably another connection on the same flight. Notice he’s not drinking coffee and is wearing a mask: 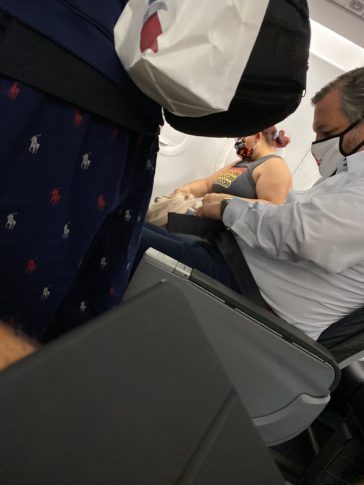