I won’t even call it a gesture. It was just a placement of his fingers. Three of them, counting his victories on the game show Jeopardy! But that simple numeric acknowledgement spawned a whole passel of preachy news articles.

And the whole thing started with some jackass on Twitter. Of course.

It began on Thursday.

‘Jeopardy!’ winner slammed for allegedly holding up a white power hand gesture after a group of former contestants on the show sent an open letter accusing the producers of missing it. #THRNews pic.twitter.com/k6OL9zYCun

As I said, it’s stupid. He was counting wins.

He held up three fingers when he won for the third time. That's the entire thing. https://t.co/gRsNGvyeky

But dumb as it is, it sparked a big outcry … Or wait, did HE spark a big outcry? Did natural reactions from viewers? Or was it actually some manufactured trash?

RedSteeze (Stephen Miller) has the answer to that question.

This all started from a Twitter account with 30 Twitter followers, was passed to a former contestant (who has since deleted their account), who wrote a Medium letter (With 28 subscribers.), and now it's turned into this. pic.twitter.com/opNaf8RqFX

He now is forced to deny any white power ties and issue an apology.. Because a majority of news outlets are labeling him a white supremacist because of one Twitter account with 30 followers. pic.twitter.com/YjvGrAp6kF

Manufactured by the press. What a shocker.

tHe MeDiA iS nOt ThE pRoBlEm

This man was forced to apologize for everyone else getting outraged, then had to apologize a second time because his first version wasn’t denouncey enough. 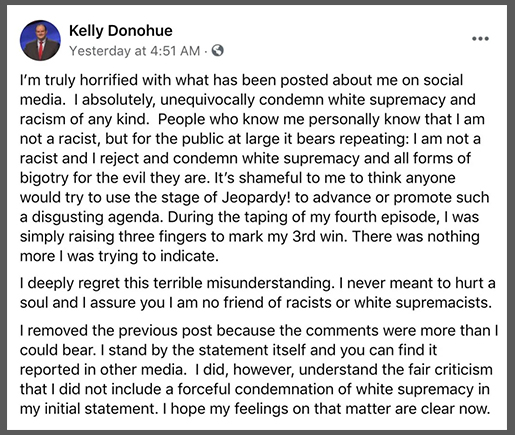 The press is the enemy of the people. Is there any question about that?