The perfect example of the activist class. The guy who traded on the deaths of his classmates to get acclaim and attention got into a pillow fight and lost.

David Hogg tried to start and run a business and couldn’t hack it. He’s bowing out of the pillow company that theoretically still exists, which was formed to sell pillows that aren’t My Pillow, the product invented, sold by, and turned into a multi million dollar business by Mike Lindell.

But Activist America is allergic to work, and so he quit. It’s one of the many millions of reasons that the activists don’t even intend to win their fights. They want the job, not the victory. They want the money.

Look at this loser: 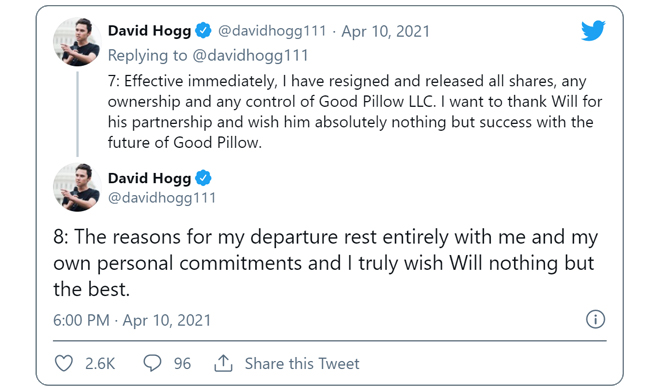 He admits it right here, even though he doesn’t think he does.

“I do hope to one day shape our global community”

LOL!! If being a humiliating self-parody were a gig this kid would be richer than everyone.

Here is one totally perfect point:

turns out business owners who are successful actually worked hard for what they have and being a white male isn’t a golden ticket https://t.co/OqEko6h48J

Got ya there, buddy boy.

Also this from the Daily Wire is icing on the cake.

It is not clear what “shares” Hogg is referring to as “GoodPillow” appears to be structured as a limited liability company (LLC), which does not issue shares.