The liberal media and the AP clearly don’t want to attack Joe Biden for causing this historic border surge, which has DHS reeling as they try and cope with tons of unaccompanied children crossing the border every day.

No, they are saving their attacks for Republicans who have NOTHING to do with the great upheaval that Biden has caused:

AP – Delegation trips to the border. Apocalyptic warnings. A flurry of press conferences.

Republicans still divided over former President Donald Trump’s legacy are seizing on his signature campaign issue, turning their focus to immigration as they try to regain the political upper hand.

Faced with President Joe Biden’s early popularity, good news about vaccinations, and Americans’ embrace of the COVID relief bill Washington Republicans opposed, the GOP is leaning in on the highly charged issue amid a spike in border crossings. They hope immigration can unite the party heading into next year’s elections, when control of Congress is at stake.

Just look at how they are painting Joe Biden in such a good light, as this popular president who is giving money and vaccines to helpless, needy Americans. While evil Republicans are trying to use this border surge against Biden, a border surge he had nothing to do with. Think I’m kidding?

The situation at the Southern border is complex. Since Biden’s inauguration, the country has seen a dramatic spike in the number of people encountered by border officials, with 18,945 family members and 9,297 unaccompanied children encountered in February — an increase of 168% and 63% from the month before, according to the Pew Research Center. That creates an enormous logistical challenge, since children, in particular, require higher standards of care and coordination across agencies.

But that hasn’t stopped Republicans from seizing on the issue, led by Trump himself. They blame Biden, who has been deeply critical of Trump’s approach, for rolling back many of the former president’s hardline deterrence policies. And they liken Biden’s new, kinder tone to an invitation to would-be border crossers.

They don’t for one second mention how Biden undid everything that Trump did to secure the border and keep surges from happening. They don’t mention how he killed the Remain in Mexico agreement, the Safe Third Agreements with Central America or how Biden resurrected catch and release again. Not to mention how Biden said over and over during the campaign that migrants should come to the border and apply for asylum because they deserve to be heard.

No, what they do is aim their fire at Republicans for SEIZING on the border surge for and playing politics with it, even turning Biden’s new, kinder tone against him!

And just to point out, the Biden surge of unaccompanied children right now is WORSE than what Trump had to deal with in 2019. We don’t have data on March yet, but as of February it was definitely spiking far higher: 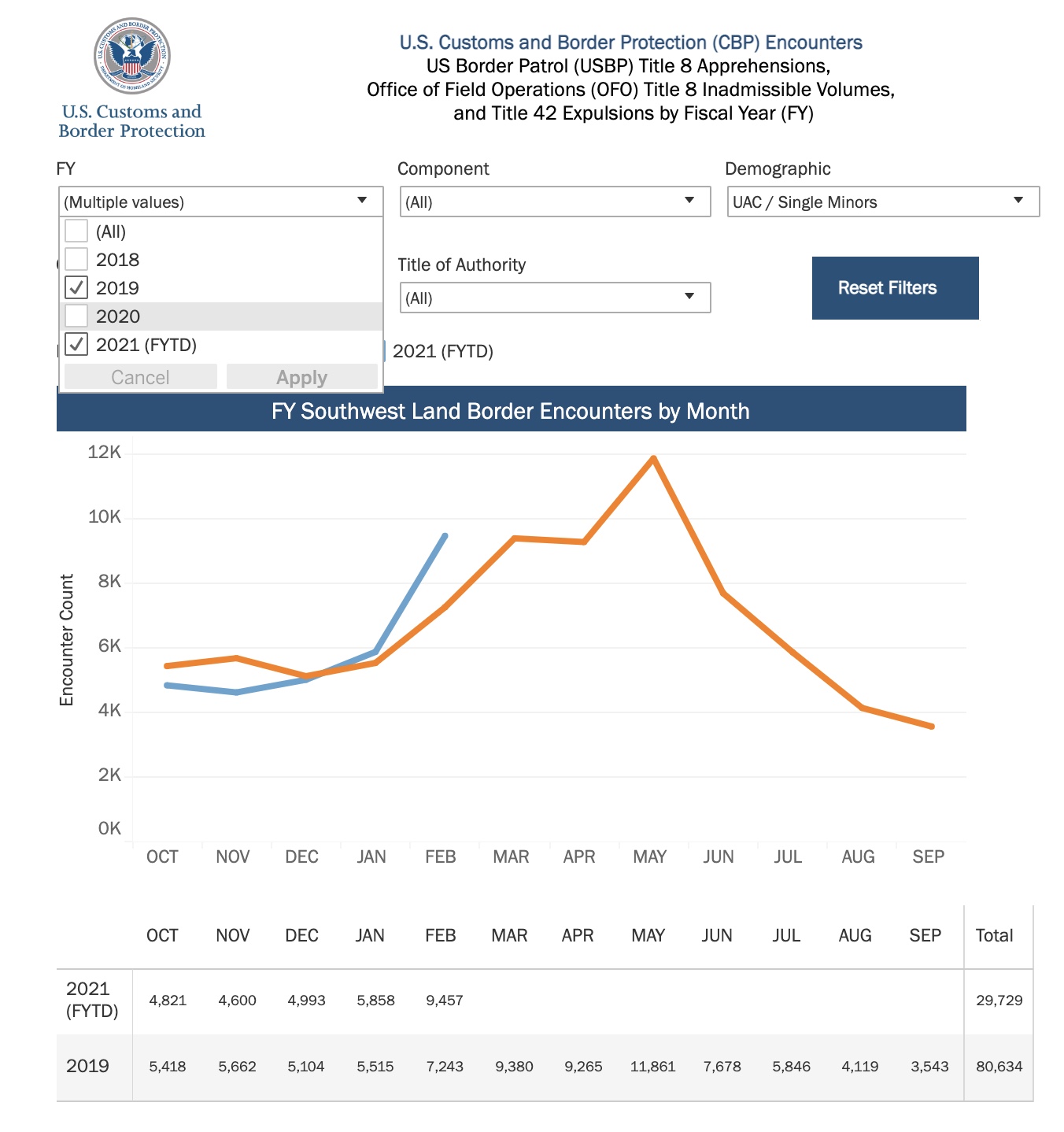 What the AP is doing in this article to make it sound like Trump’s numbers were worse in order to attack Republicans was to couple both unaccompanied children WITH family units, and in that case it’s true.

But if you just look at unaccompanied children alone, as I showed above, or if you just put all the categories together and show everything, Biden’s surge is much worse: 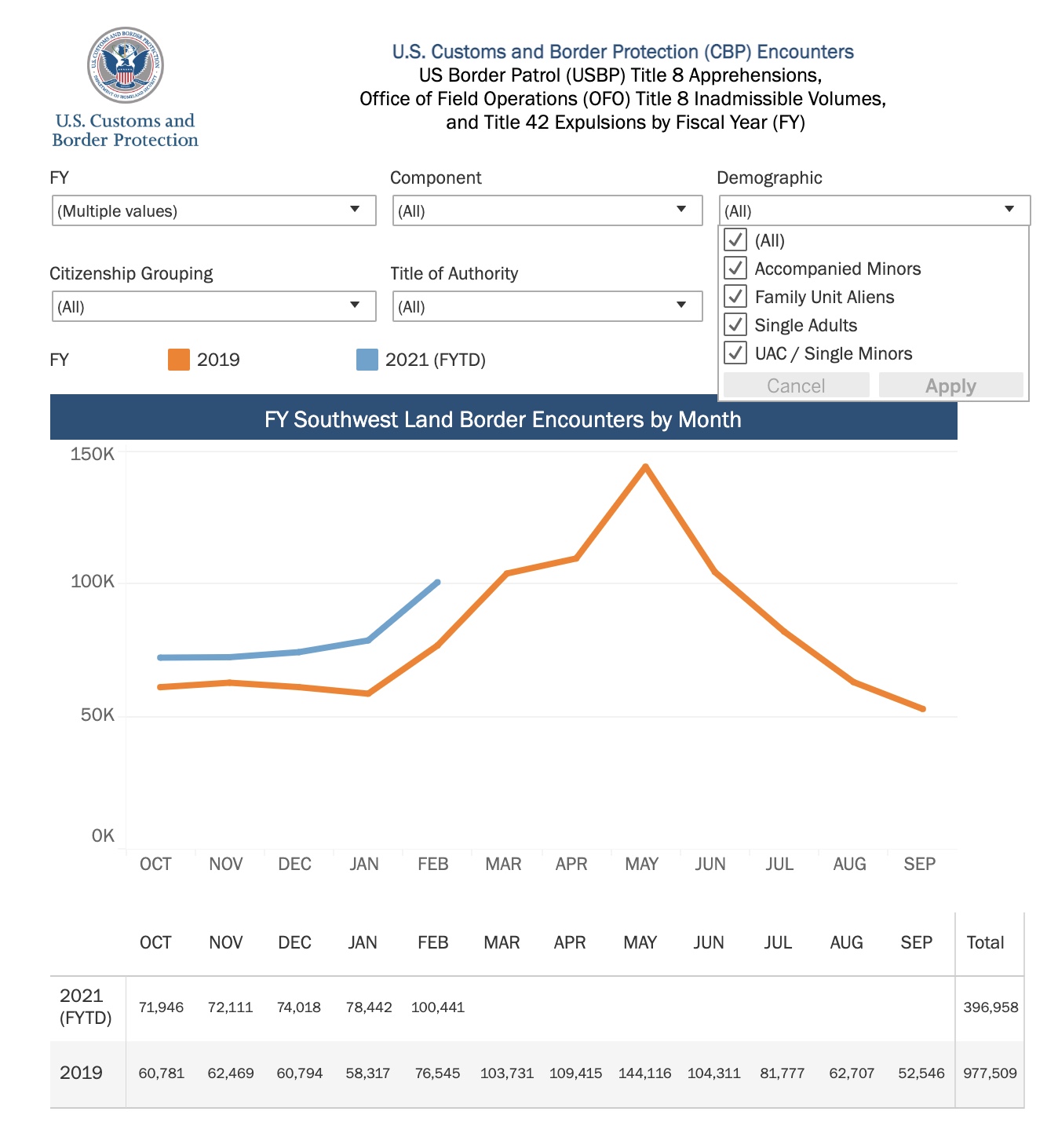 As I’m finishing this post, I see this from the Border Patrol:

No end in sight as large groups continue entering in the #RGV.

In 48 hrs, agents arrested 369 illegal aliens mainly consisting of family members and UACs in 4 separate groups. This year, agents have encountered 19 groups of 100 or more people illegally entering the US. pic.twitter.com/GjPZ473XeK

But hey, let’s attack Republicans and let Biden off the hook, because 2022 is coming and Republicans must be destroyed.