The National Rifle Association filed for Chapter 11. That sounds bad, and is in some ways. But in other way it’s good news.

They had a lot of problems internally and externally, but one of the biggest problems the NRA faces, always, is the toxicity of politics and the unhinged left in interfering with their working protecting one of our most basic rights that also happens to be a foundation of the Constitution. That interference frequently through the courts and through local and state government.

Well they’re moving to Texas to reincorporate and try to alleviate that toxic legal warfare environment.

From the Daily Caller.

NRA Executive Vice President Wayne LaPierre wrote in a letter posted on the non-profit’s website that the group would be “free from the toxic political environment of New York.” New York State Attorney General Letitia James is currently suing the NRA with the goal of dissolving the organization. New York’s lawsuit alleges that top executives, including LaPierre, stole millions of dollars from the gun rights group.

At the time, NRA president Carolyn Meadows told the Daily Caller that the lawsuit was “a transparent attempt to score political points and attack the leading voice in opposition to the leftist agenda.”

LaPierre also said in the letter that the NRA’s move to file for Chapter 11 bankruptcy protections was merely employing a rule that is “often utilized by businesses, nonprofits and organizations of all kinds to streamline legal and financial affairs.”

This is the length you have to go to in order to escape the oppression of fascist dictatorships like New York and California. 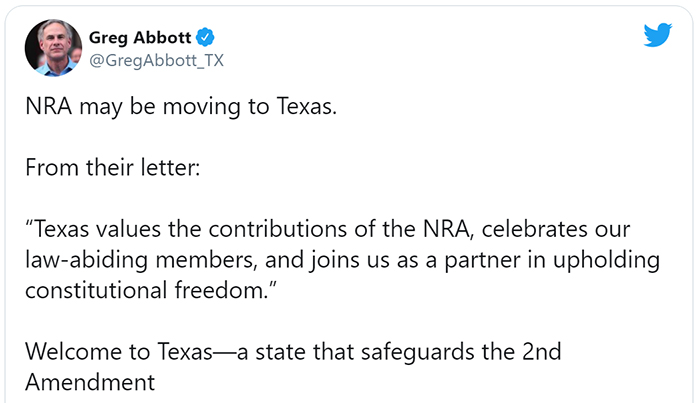 Here’s hoping this critically important organization enters a new era in a new state with new leadership and new sense of purpose.