They’ve been taking methodical steps. Kick everyone off Twitter and Facebook. Move on to Instagram and Reddit. Once they go to Parler, kick Parler off the app stores. And then, the final straw: disable the service by booting them from their data host.

Amazon Web Services (AWS) hosts cloud computing, APIs, databases, etc for basically every major thing you use on a device. It’s the place to host the things that make apps and data-driven websites work. It’s where Parler’s functions as a service take place. And now they’re being kicked off, purged from the service, at midnight on Sunday.

That means NO MORE PARLER until they find a new host. The service simply will not work once the expulsion is complete. Here’s the message from John Matze. 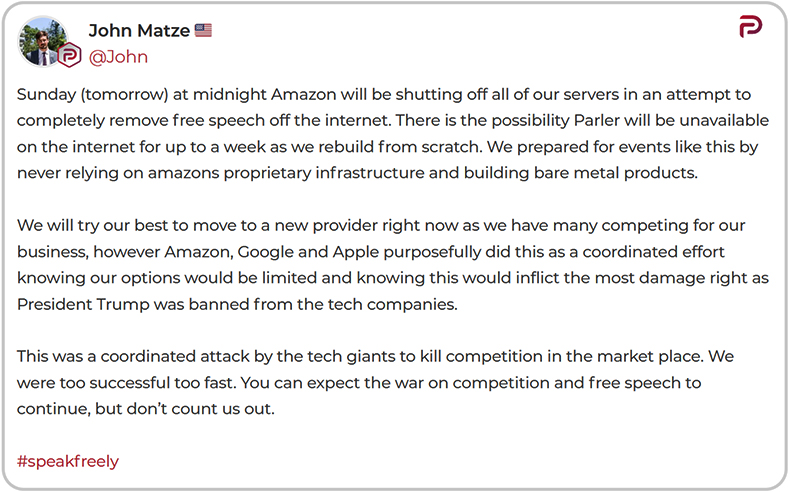 Thank you for speaking with us earlier today.

As we discussed on the phone yesterday and this morning, we remain troubled by the repeated violations of our terms of service. Over the past several weeks, we’ve reported 98 examples to Parler of posts that clearly encourage and incite violence. Here are a few examples below from the ones we’ve sent previously: [See images above.]

Recently, we’ve seen a steady increase in this violent content on your website, all of which violates our terms. It’s clear that Parler does not have an effective process to comply with the AWS terms of service. It also seems that Parler is still trying to determine its position on content moderation. You remove some violent content when contacted by us or others, but not always with urgency. Your CEO recently stated publicly that he doesn’t “feel responsible for any of this, and neither should the platform.” This morning, you shared that you have a plan to more proactively moderate violent content, but plan to do so manually with volunteers. It’s our view that this nascent plan to use volunteers to promptly identify and remove dangerous content will not work in light of the rapidly growing number of violent posts. This is further demonstrated by the fact that you still have not taken down much of the content that we’ve sent you. Given the unfortunate events that transpired this past week in Washington, D.C., there is serious risk that this type of content will further incite violence.

AWS provides technology and services to customers across the political spectrum, and we continue to respect Parler’s right to determine for itself what content it will allow on its site. However, we cannot provide services to a customer that is unable to effectively identify and remove content that encourages or incites violence against others. Because Parler cannot comply with our terms of service and poses a very real risk to public safety, we plan to suspend Parler’s account effective Sunday, January 10th, at 11:59PM PST. We will ensure that all of your data is preserved for you to migrate to your own servers, and will work with you as best as we can to help your migration.

The tech companies colluded to kick MAGA out of public spaces, and now they are getting rid of the alternate spaces to which MAGA migrated. It is the very definition of a purge.

The world is full of Stalins masquerading as product and service providers.