Bed Bath & Beyond and Kohls has decided to stop selling his ‘MyPillow’ after a controversy erupted over Lindell’s visit to the White House earlier this month:

DC EXAMINER – MyPillow CEO Mike Lindell said that two large retailers have pulled his products from shelves as he continues to question the results of the presidential election.

“I just got off the phone with Bed Bath and Beyond,” Lindell said during an interview with Right Side Broadcasting on Monday night. “They’re dropping MyPillow.”

“I just got off the phone not five minutes ago,” Lindell, a staunch supporter of President Trump, continued. “Kohl’s. All these different places.”

BREAKING: @realMikeLindell just announced in an interview with @brianglenntv for @RSBNetwork that @BedBathBeyond would no longer carry @MyPillowUSA products. Lindell called @slpng_giants, “the most evil people on the planet.” See video of Lindell’s announcement below. pic.twitter.com/IiGBKFitLM

The purge continues. But having ceded that, I must say that Lindell made it too easy for these companies to be harassed into dropping him.

Just a few days ago Mike Lindell was seen leaving the White House. Instead of using a briefcase to carry his papers, he carried them in his hand in such a way that people could make out what they said. And it was soon revealed that Lindell was asking Trump to use the Insurrection Act and Martial Law to undo the results of the election: 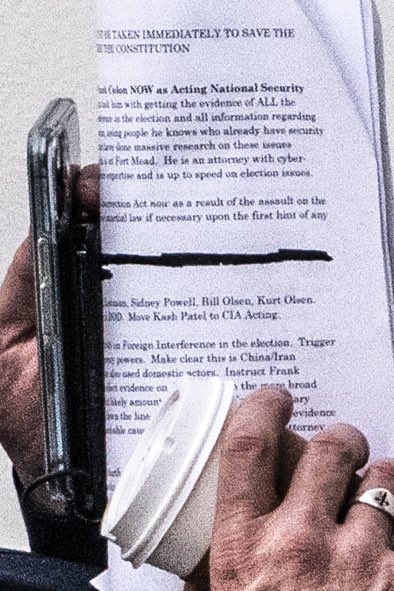 Honestly, this is the kind of crazy stuff Lin Wood has been pushing. And yes, it is crazy. I’m sorry if this upsets some of you, but there was no violent uprising which would necessitate such drastic measures. I know, Democrats got away with a lot of election fraud. It is a great injustice. But to go to such an extreme as to put troops on the streets and declare martial law is just too much. And to his credit, Trump clearly passed on this.

I like Mike Lindell and appreciate what he did during the Pandemic to help us get through. And I hate cancel culture, especially when stores are being harassed by these left-wing groups into trying to destroy people. But just saying, don’t make it easy for them.