Biden’s DHS Secretary is now admitting that the border surge of illegals is now worse than it’s been in over 20 years, but they still won’t call it a crisis:

FOX NEWS – Homeland Security Secretary Alejandro Mayorkas on Tuesday said that the U.S. was on track to encounter more migrants than it had in the last 20 years, as he defended the administration’s approach to a border surge that he described as “difficult” – but again fell short of calling it a crisis.

“The situation at the southwest border is difficult,” Mayorkas said in a lengthy statement. “We are working around the clock to manage it and we will continue to do so. That is our job. We are making progress and we are executing on our plan. It will take time and we will not waver in our commitment to succeed.”

He spoke days after Customs and Border Protection (CBP) announced that it had encountered more than 100,000 migrants at the border in February, while numbers of child migrants in custody have also increased dramatically. The Biden administration has been moving to increase capacity of facilities to house migrants, and building a number of extra facilities – including looking at NASA sites and military bases.

On Tueasday Mayorkas said the U.S. has not seen these kinds of numbers in decades.

“We are on pace to encounter more individuals on the southwest border than we have in the last 20 years,” he said, although he later added that the situation is “not new” and noted the U.S. has faced border spikes before.

Not only will they still not call it a crisis, they also aren’t blaming Biden’s policies either:

Mayorkas blamed poverty, violence, corruption and recent hurricanes for fueling the migrant numbers, and said things were made more complex by the pandemic – while blaming the prior administration for having “tore down the lawful pathways that had been developed for children to come to the United States in a safe, efficient and orderly way.”

“As difficult as the border situation is now, we are addressing it. We have acted and we have made progress,” he said. “We have no illusions about how hard it is, and we know it will take time. We will get it done.”

Just to put this into some perspective, 2019 was the worst year recently and Trump essentially fixed the problem. In the line graph below, 2019 is the orange line, 2020 is the red line and 2021 is the blue line: 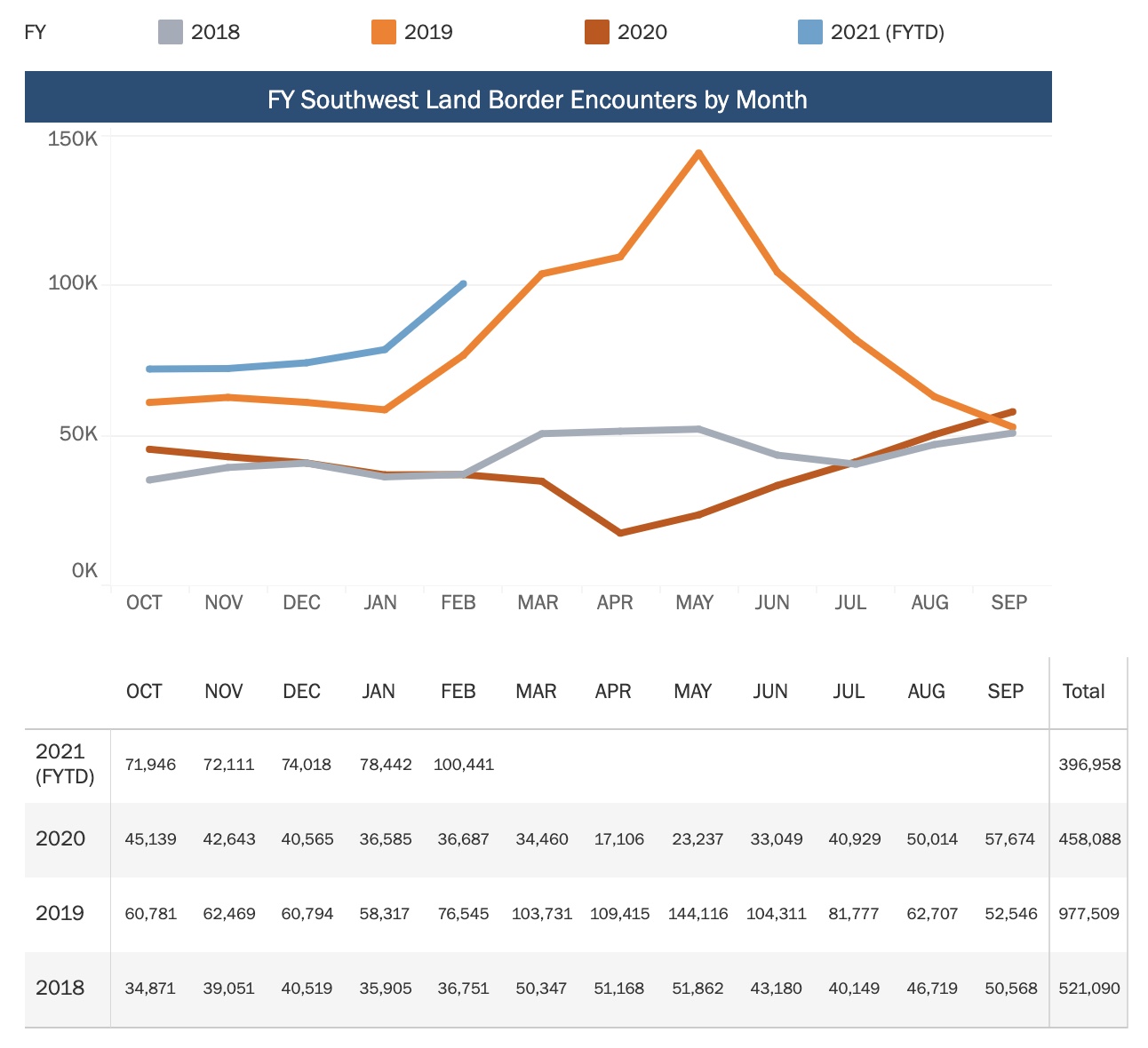 You’ve got the raw data below the graph, but you can see that Biden’s 2021 blue line is already far and above what we were seeing in 2019, and all this is expected to simply get worse.