As any of you know after watching elections in the past, Iowa is a big deal. It can make or break a campaign, and I have a feeling it’s going to break quite a few Democratic primary campaigns for president still polling in single digits come February 3rd. But that’s still a few months away.

Right now, it appears that Biden is having trouble staying at the top of the pack and in the latest NY Times poll, he’s slipped out of the top three:

Warren at the top, with Sanders, Buttigieg and Biden slap-fighting it out for 2nd.

But this is just one poll. You know me, I like to look at trends, so here’s all the polls with these four going back to September: 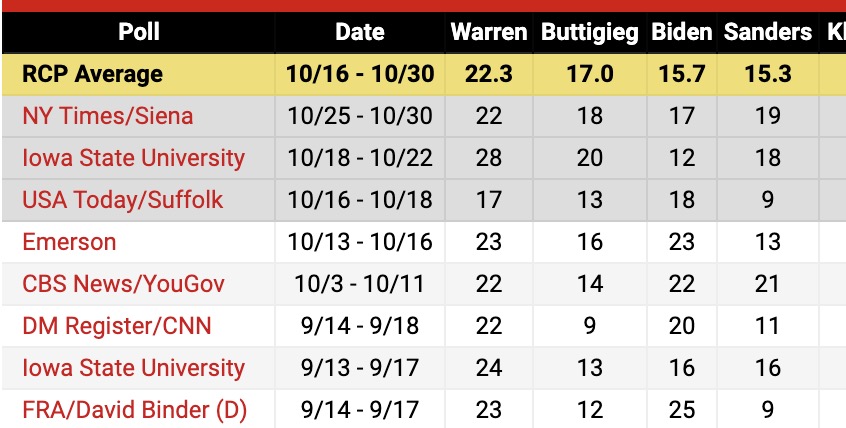 In this polling summary you can see that Biden has gone from being the front runner, or at least tied for first, to third or fourth place behind Warren, Buttigieg and Sanders.

Note how Buttigieg has risen in the Iowa State University poll from his previous position in September. And even in today’s NY Times poll he still holds a commanding 18%.

But it looks like Warren is the consistent frontrunner in Iowa right now as Biden slips. I doubt this will hold steady until February 3rd, so it will be interesting to see how this changes over the next few months.