CNBC – Consumer prices in January surged more than expected over the past 12 months, indicating a worsening outlook for inflation and cementing the likelihood of substantial interest rate hikes this year.

The consumer price index, which measures the costs of dozens of everyday consumer goods, rose 7.5% compared to a year ago, the Labor Department reported Thursday.

That compared to Dow Jones estimates of 7.2% for the closely watched inflation gauge. It was the highest reading since February 1982.

Stripping out volatile gas and grocery costs, the CPI increased 6%, compared to the estimate of 5.9%. Core inflation rose at its fastest level since August 1982.

The monthly CPI rates also came in hotter than expected, with headline and core CPI both rising 0.6%, compared to the estimates for a 0.4% increase on both measures.

CNN’s Christine Romans says this is the fastest rate of price increases since 1982, noting that economists thought inflation would be moderating now but that’s not the case at all:

Prices on everything from food to fuel, vehicles to shelter continues to increase with no end in sight: 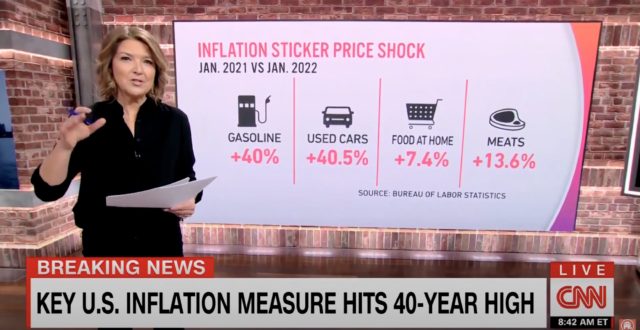 Maybe Joe Biden can try one of his sith lord mind tricks to convince everyone that the economy is doing great before the elections get here.