Elizabeth Warren is now signaling her campaign is in trouble with a desperate plea for more donations to her campaign:

Elizabeth Warren records video telling supporters "I need to level with you: Our movement needs to raise critical funds so I can remain competitive in this race through Super Tuesday." pic.twitter.com/RdKeP2wNxU

Warren didn’t do that terribly in Iowa, getting only five fewer delegates than Buttigieg and four fewer than Bernie coming in third.

But in New Hampshire she didn’t get any delegates, which puts her well behind Buttigieg and Sanders: 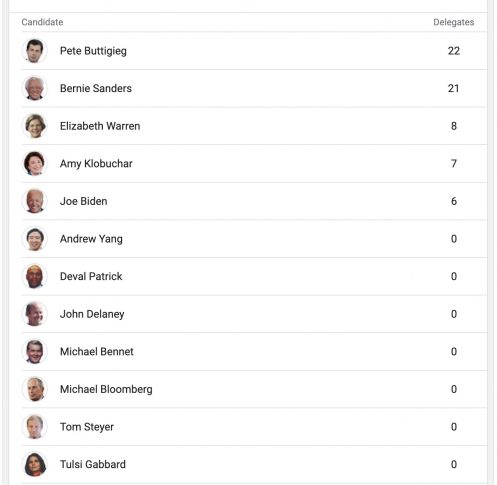 We still have Nevada and South Carolina coming near the end of this month, with both having 48 and 63 delegates respectively. Warren currently places 3rd in Nevada polling and 4th in South Carolina polling. I suspect that if she can’t win many delegates from either of these states, she might be done before Super Tuesday gets here on March 3rd.

In related news, Biden, who only has six delegates thus far, looks like he might come out on top in Nevada and South Carolina if polling is any indication. He’s essentially tied for first in Nevada with Sanders and is on top with +12.5 in South Carolina. Buttigieg, who leads the pack right now, may not fair so well in either state.