This story is outrageous. A black Wisconsin police officer, who is currently suspended with pay and under investigation for his part in three officer involved fatal shootings over the past five years (even though it’s never been demonstrated he’s done anything wrong), was at the home of his girlfriend and her children when a 50 to 60 person Black Lives Matter mob showed up and tried to kill him (h/t: Redstate):

The Wauwatosa Police Department has confirmed that a mob attacked officer Joseph Mensah and his girlfriend last night. The local media is actively downplaying this story to preserve the “peaceful protesters” narrative. These are violent terrorists, plain and simple. pic.twitter.com/nKwqoAHadJ

In case you can’t read that press release by the Wauwatosa Police Department, here’s what it says:

On August 8th, 2020 at approximately 8:05 PM, a large group gathered in the area of N. 100. St. and W. Vienna St. in the City of Wauwatosa. The group. estimated to be between fifty and sixty people. targeted the private residence of Wauwatosa Police Officer Joseph Mensah and began to vandalize the home. Officer Mensah attempted to establish a dialog with the group but was ultimately physically assaulted outside of his home. As Officer Mensah retreated into his home, armed protestors approached the rear door and a single shotgun round was discharged by a member of the group into Officer Mensah’s backdoor. The Wauwatosa Police Department received assistance in disbursing the crowd from numerous neighboring agencies. At this time the investigation into this incident is ongoing. Once more information becomes available, further communications will be issued.

Not only did the protesters attack Mensah, but one of them fired a shotgun blast into his back door. Mensah wrote about it on his Facebook page and said the shot just barely missed him:

Last night, protesters came to my girlfriend’s house while I was there, and tried to kill me. I was unarmed and tried to defend my property and the property of my girlfriend. We were both assaulted, punched, and ultimately shot at several times. A shotgun round missed me by inches. Not once did I ever swing back or reciprocate any the hate that was being directed at me. I am all for peaceful protests, even against me, but this was anything but peaceful. They threw toilet paper in her trees, broke her windows, and again, shot at both of us as they were trying to kill me. There are children that live there any the knew that. The irony in all of this is that they chanted Black Lives Matter the entire time, but had zero regard for any of the black children that live there or me, a black man.

Notice the last sentence: “…they chanted Black Lives Matter the entire time, but had zero regard for any of the black children that live there or me, a black man.”

Here’s a video I found of the mob throwing toilet paper into the trees:

Cell phone video from resident in neighborhood by 100th & Vienna in #Wauwatosa shows protesters vandalizing outside of Joseph Mensah's girlfriend's house last night. @WauwatosaPD say as Mensah tried to talk w/ the crowd he was physically assaulted & that some1 fired a shot @tmj4 pic.twitter.com/jNMrU7TXI3

And here’s a local report I found on Youtube covering the story:

And new tonight, a Democrat State Representative has admitted to being there with the mob:

Democratic State Representative David Bowen has admitted to being part of a mob that assaulted and fired a shotgun at Wauwatosa Police Officer Joseph Mensah on Saturday night. https://t.co/Gp9GaD46MD

Democratic State Representative David Bowen has admitted to being part of a group of people that assaulted and fired a shotgun at Wauwatosa Police Officer Joseph Mensah on Saturday night.

“In my time at the protest in front of Mensah’s home, I personally felt threatened by his actions: spraying pepper spray into the crowd, yelling and inviting protesters to fight him, [and] taking his big dog out to potentially attack people,” Bowen said in a statement released Monday accusing both Mensah and the Wauwatosa Police Department of lying about the group’s actions.

Video of the attack on Mensah’s girlfriend’s home provided to “The Dan O’Donnell Show” contradicts Bowen’s statement, as dozens of people threw toilet paper and other objects at the house and screamed obscenities at Mensah and his family before at least one gunshot was fired. Mensah’s girlfriend, a law enforcement officer who is not being named to protect her identity, was violently assaulted and posted pictures of her injuries to social media.

Her children were in the home when one of the attackers fired a shotgun into it.

Bowen, 33, has served in the Wisconsin Assembly since 2015 and was a super-delegate in the 2016 Democratic Presidential Primary. He has made no secret of his support for what have become increasingly violent demonstrations outside the homes of prominent law enforcement figures, including Milwaukee County District Attorney John Chisholm and former Milwaukee Police Chief Alfonso Morales.

In his statement Monday, Bowen provided no evidence that either Mensah or the Wauwatosa Police Department was lying about the violent attack.

“No one tried to kill [Mensah] or his girlfriend. That’s a lie. No one tried to enter his home. That’s a lie. There weren’t several shots fired. Another lie. No protestor [sic] shot at the back door. That’s the biggest lie,” Bowen said in a tacit admission that he saw the shooting and is at least a material witness to the attack. “Joseph Mensah chose to engage with a protestor [sic], and pulled the trigger on the individual’s firearm.”

According to Wauwatosa Police, Bowen was lying.

“The group, estimated to be between fifty and sixty people, targeted [Mensah’s] private residence and began to vandalize the home,” Wauwatosa Police Sergeant Abby Pavlik said in a news release Sunday. “Officer Mensah attempted to establish a dialog with the group but was ultimately physically assaulted outside of his home. As Officer Mensah retreated into his home, armed protesters approached the rear door and a single shotgun round was discharged by a member of the group into Officer Mensah’s backdoor.”

This is consistent with video evidence one of the attackers shot of the incident and of the physical damage to the property, and this evidence directly contradicts Representative Bowen’s statement.

Not only was this state representative there, but he saw the shooting and now he’s lying about it. 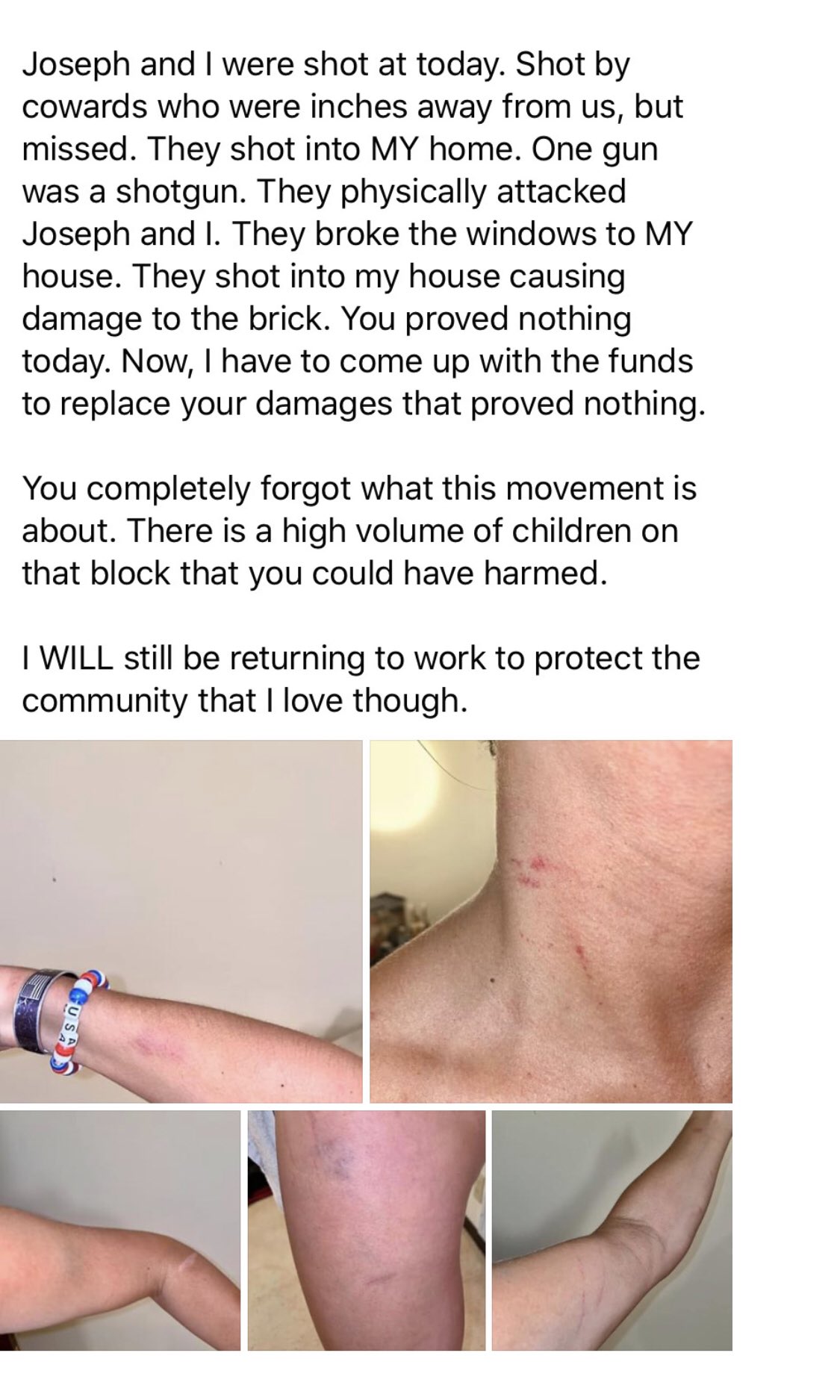 Read more about the backstory on Joseph Mensah below: