Leonna Hale was the passenger in the stolen vehicle and her accomplice, who was driving, also ran from police.

I’m not sure what happened to him, but BLMers and their fake news media quickly jumped on this incident claiming that she was an unarmed, black, pregnant woman who police shot five times (h/t: Andy Ngo):

The police handcuffed her while she was bleeding out on the pavement.

The woman has been identified as 26-year-old Leonna Hale. https://t.co/MN336xAZXo

BREAKING: A witness reveals that Kansas City police shot Leonna Hale, a pregnant unarmed Black woman, five times as she was running away from them — she has been hospitalized with serious injuries but remains stable. RT TO DEMAND THAT THE POLICE BE INVESTIGATED IMMEDIATELY!

#LeonnaHale is a 26 year old unarmed pregnant Black Woman who was shot five time by Kansas City police on Friday. She had her hands up and told police she could not follow their directions to get on her stomach b/c she was pregnant. There is no reforming this. #AbolitionNow pic.twitter.com/07xyzD8gck

Just like in the Michael Brown shooting, the witness lied. Hale was armed with a pistol and pointed it at police before they opened fire.

Here’s a photo from police body cameras via KMBC News: 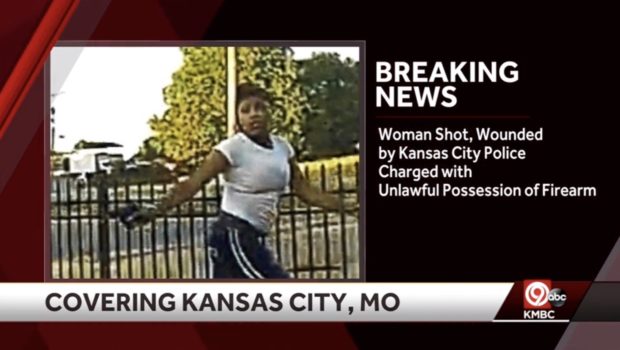 Below is their report on it:

A 26-year-old Kansas City, Kansas, woman who was shot by Kansas City, Missouri, police officers Friday night has been charged in the case.

Jackson County Prosecutor Jean Peters Baker said Leonna M. Hale was charged with unlawful possession of a firearm, unlawful use of a weapon and a misdemeanor of resisting a lawful detention.

Hale was shot by Kansas City police officers outside a Family Dollar store near Sixth Street and Prospect Avenue. Authorities said the car she was in matched a description of one involved in an armed carjacking in Kansas City, Kansas.

When officers conducted a car check, the man driving the car jumped out and ran.

Court documents said Hale got out of the passenger side of the car and went to the rear of the vehicle.

Video surveillance from body cameras showed Hale being told to drop the firearm and pointing it at the officers before the officers fired three shots, according to court records.

Hale was taken to a hospital, where she was last listed in stable condition.

“Some false narratives about what happened last Friday night at 6th and Prospect Avenue, unfortunately, were relied upon by some media and other sources. Our job, as prosecutors, is to remain neutral and review all evidence. Our review of body cam videos provided the actual accounting of events that night.

“Our review of the investigation revealed the defendant, although she denied having a weapon at the time of the encounter with law enforcement officers, continually displayed a weapon during her encounter with police officers and also appeared to be attempting to flee. The two officers stated that she was armed with what they believed to be a handgun. Body camera footage confirms the officers’ statements that Hale was holding a handgun. Still photos, taken from body cam footage, of this encounter also demonstrate a weapon was present and in the hands of the defendant.”

Not only was she armed, but she survived the shooting and is listed in stable condition. And there’s no mention of her being pregnant.