Liberal activists on Saturday have taken the next inevitable step in their descent into total lawless madness. They don’t just want to Defund the Police. They want public retribution exacted against federal and local law enforcement (and their families) involved in responding to the vicious and murderous riots against America in Democrat hellholes across the country.

Amy Siskind, a famous writer and author who is published at places like the Daily Beast and makes appearances on TV and does other rich white privilege stuff, made this declaration on Saturday.

It would be helpful if we could start to identify these storm troopers. This monster has a mother. Maybe a wife and family. They should be publicly named – and of course held accountable when this reign of terror is over. 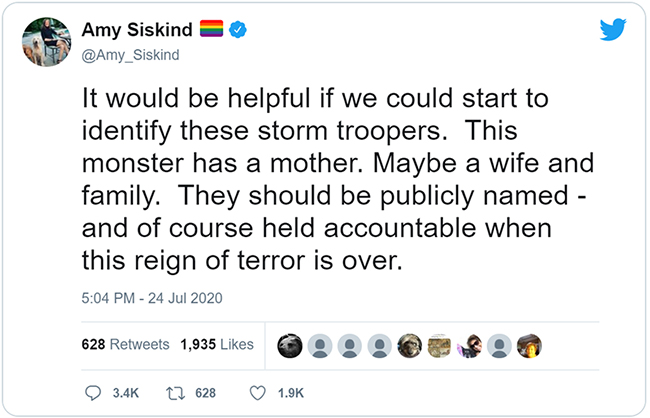 “Maybe a wife and family,” writes the loathsome Siskind. “They should be publicly named – and of course held accountable when this reign of terror is over.”

That’s as clear a threat as there can possibly be. Not the fake unsafe that liberals fret about, like having to write at a website with a fellow liberal who isn’t quite woke enough, but actual solicitation of harm.

When Trump says the press is the enemy of the people, the press and people like Siskind have puppies over it and whimper in the streets about how he’s going to get CNN blown up. But Siskind spells out an actual and credible threat against LAW ENFORCEMENT AND THEIR FAMILIES and that’s totally okay with these psychos?

In fact, it’s more than okay with them, look at this jackass.

It is imperative that every single DHS troop terrorizing America be publicly identified and held to account for their fascism.

There is a huge moral risk if any single one of them get away with their crimes.

ID every single one. Publicly. Who are these pigs?#PortlandProtests https://t.co/gMPxev0J0g

That’s the editor for Raw Story, a site used often for reference by places like Daily Kos and Media Matters. And from there all the way up to MSNBC and then CNN. Wants federal officers, who are Americans, “held to account for their fascism” and calls them “pigs.” That’s called dehumanizing, and on other days of the week people Bob Brigham (you can call him Mud Bog) pretend that they don’t like it.

And if you think a negative reaction has them backing off, think again.

And no, Amy sweetie, this little ex post facto attempt to refine your threat doesn’t make it better:

We still live in a country with laws. Even if Trump and his fascists thugs don’t like that. You can’t sweep people up in unmarked vans and whisk they away. There will be investigations and accountability. And like with Hitler’s gestapo, the ‘I was ordered to’ is NOT an excuse!

I’m sure that the rioting rioters launching projectiles at cops, not to mention shooting each other and stabbing black men and burning down cities and all that other “peaceful” stuff, are going to differentiate. “No no, Bog, not THAT riot cop. HE’S got a name tag.”

You’re out of your ever-loving gourd, lady. We can smell the panic setting in…

But it’s WAAAY to late to try to talk your way off the cliff.

Oh and let’s not forget to note that it’s a violation of Twitter’s policies for her to do this, not that it will ever be acted on.

Important to note that whether or not you agree with the decision to use federal law enforcement in Portland, it’s despicable behavior to call for the doxxing of these officers and their families. This is, of course, also a pretty obvious violation of Twitter’s safety guidelines. https://t.co/rkPps8GE1T

UPDATE: Siskind deleted her original tweet, though not the tweets defending the original tweet. And she added more to the list, too. So in other words she doesn’t retract the statement (and hasn’t), she just wanted people to stop retweeting it for the sake of her safe zone.