The Alabama Senate just overwhelmingly voted to protect minors from the dangerous transgender hormone therapy by making it a felony:

CBS NEWS – Under a new law, transgender youth in Alabama could not be treated with puberty-blockers, hormone therapy or surgery. The state Senate voted to make the treatment a felony on Tuesday.

Senators voted 23-4 to approve the measure, dubbed the Vulnerable Child Compassion and Protection Act, sponsored by Republican Senator Shay Shelnutt. The bill now heads to the state House of Representatives, which has already approved a companion bill.

The two bills would make it a felony for medical professionals to treat transgender minors under the age of 19 with gender-affirming care. Violators could face up to 10 years in prison or a $15,000 fine.

The bill also requires school staff in the state to disclose to parents that “a minor’s perception that his or her gender is inconsistent with his or her sex.” Essentially, teachers would be required to “out” transgender students to their guardians — regardless of whether they are ready to do so.

“Children aren’t mature enough to make these decisions on surgeries and drugs,” Shelnutt told The Associated Press. “The whole point is to protect kids.”

While similar measures have been considered across the country, Alabama would be the first state to pass such a bill. Parents, members of the transgender communities and medical experts opposed to the bills say it is dangerous, and that lawmakers do not understand the already difficult process to receive gender-affirming care.

Notice they are protecting minors all the way up to the age 18. That’s fantastic!

Just to give you an idea, this is what the Senate and House look like in Alabama: 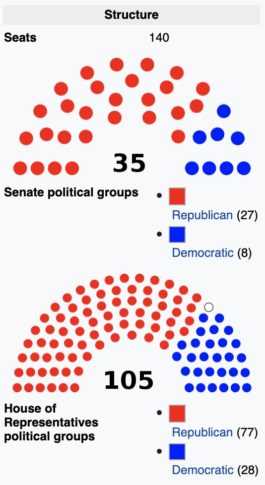 As CBS notes, a similar measure has already passed the House so this should easily become law. That is, assuming Republican Governor Kay Ivey signs it, which seems likely.

Here’s hoping more states follow Alabama’s lead on this one!