Illegal immigration at the border is worse than we imagined, with March numbers skyrocketed well past the highest of monthly numbers in 2019, and up to a 15-year high:

NEWSMAX – The number of illegal immigrants apprehended crossing into the United States at the southern border skyrocketed in March to more than 171,000, the highest levels in at least 15 years, according to preliminary data, The Washington Post reported Tuesday.

The official U.S. Customs and Border Protection (CBP) figures contradict President Joe Biden’s claims that his administration is facing an influx no different from previous years, with border arrests and detentions more than doubling since January.

Last month, CBP took in more than 18,800 unaccompanied minors, a 99% rise from February and a figure significantly more than the previous one-month high of 11,861 in May 2019.

The jump in the number of migrants arriving as part of family groups was even greater last month, soaring to more than 53,000 from 19,246 in February and 7,294 in January.

“These numbers suggest a new level of challenge for the administration as they look for a sensible border strategy, particularly given the rise in the number of families,” said Andrew Selee, president of the nonpartisan Migration Policy Institute. “They’re facing a set of tough options for trying to manage the flow in a way that’s consistent with the desire for humanitarian treatment and yet dissuades people from coming.”

While Biden insisted last week that such a rise in those crossing the border happens every year, the March enforcement statistics contradict that claim, according to the Post.

The increase in crossings during the first two months of Biden’s administration is much more than any comparable period over the past two decades. The biggest two-month increase during the last big surge in 2019 was about 45,000 in raw numbers, while between this January and March it was more than 90,000.

Border agents have been contending with the overwhelming number of unaccompanied children in their care in recent weeks, with many held in cramped detention conditions for much longer than legal limits while they wait for bed space to open at emergency shelters administered by the Department of Health and Human Services.

“Got Aways” are also skyrocketing…

Another problem facing CBP officials is their attempt to apprehend more-determined male entrants, with the number of “got aways” — those who are detected but not caught — having gone up to nearly 1,000 per day, the highest in recent memory.

Agents have been so overwhelmed by family groups arriving to the Rio Grande Valley of South Texas that they began releasing some of them from custody without a formal notice to appear in court, the Post reported. Instead, they asked the family groups to report to the nearest U.S. Immigration and Customs Enforcement office when they arrive at their destination in the U.S.

The situation has become so dire, according to The Washington Free Beacon, that administration officials have requested that unrelated agency employees apply for 1-to-4-month volunteer stints at the border.

These requests are an attempt to aid Border Patrol agents, many of whom have been pulled from their regular duties patrolling the territory to care for migrant children.

Just to put this number of arrests for March into perspective, CBP, which hasn’t updated their public charts yet to show March numbers, showed this as of February: 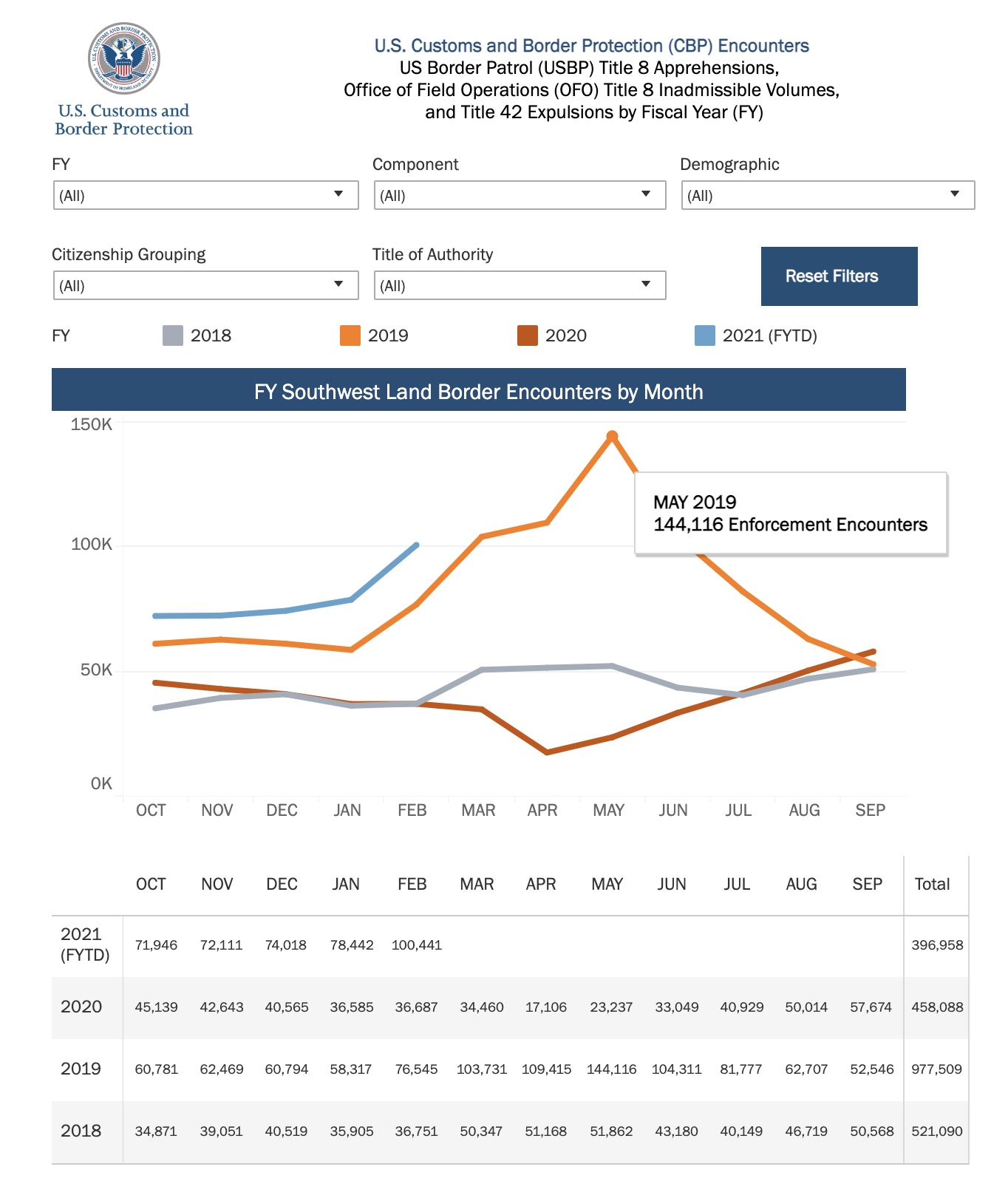 Notice that I’ve highlighted Trump’s highest month in 2019, which was just over 144k in May of that year. The numbers for March of this year, under Biden, shot way up to 171k, which wouldn’t even fit on this graph. And that’s just March. Who knows how high April and May are going to be.

In fact, Ted Cruz says we’re on pace to see 2 million cross the border this year:

We're on pace to have over 2 million people cross the border illegally this year.

This crisis was preventable.

And it’s the result of deliberate political decisions by Joe Biden that are producing this humanitarian, national security, and public health catastrophe. pic.twitter.com/Sb7rY9uyKw

This is a mammoth humanitarian crisis that Joe Biden created and the media are still collectively yawning, blaming it on everything under the sun but Biden.