This African American course is new and is being piloted in schools around the country by the College Board, who runs the SAT test and the Advanced Placement (AP) program.

Here’s the news via the Daily Beast:

Florida Gov. Ron DeSantis has rejected a College Board request to approve an African-American Studies course in his state on the grounds that the course violates state law, according to a report. The Advanced Placement (AP) program, of which a pilot has been launched, was reportedly rejected by DeSantis’ administration in a letter to the College Board from the Florida Department of Education’s Office of Articulation.

The rejection letter dated Jan. 12 said “as presented, the content of this course is inexplicably contrary to Florida law and significantly lacks educational value,” according to National Review. The letter reportedly added: “in the future, should College Board be willing to come back to the table with lawful, historically accurate content, FDOE will always be willing to reopen the discussion. DeSantis’ controversial “Stop W.O.K.E. Act,” signed into law last April, aimed in part to combat the teaching of critical race theory in Florida.

Below is a screenshot of the actual letter sent by the Florida Department of Education: 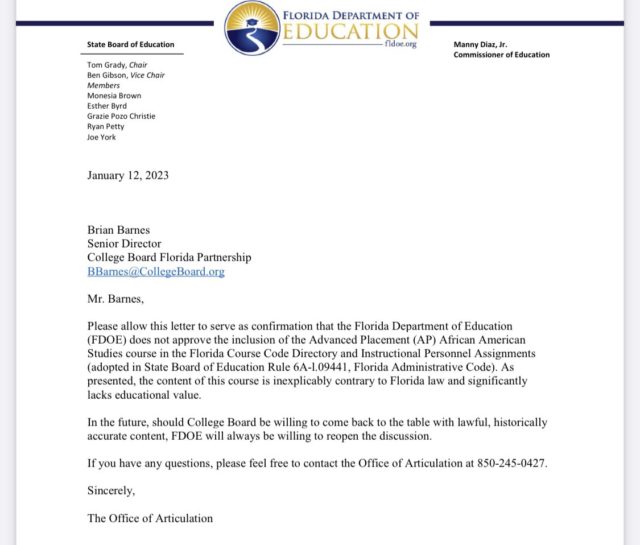 Here’s a bit more on this from Stanley Kurtz at National Review:

The College Board — the group that runs the SAT test and the Advanced Placement (AP) program — has launched a pilot version of an AP African-American Studies (APAAS) course, to great fanfare in the mainstream press. Although the APAAS pilot has received plenty of publicity, the College Board has clothed the course in secrecy. The curriculum has not been publicly released, nor have the names of the approximately 60 schools at which the pilot is being tested.

In various press accounts, College Board advisers and teachers — so as not to fall afoul of new state laws against the teaching of critical race theory — have denied that APAAS advocates CRT or indeed any particular theory or political perspective at all.

On January 12, however, the administration of Florida governor Ron DeSantis wrote a letter to the College Board informing it that Florida was rejecting its request for state approval of APAAS. The letter, from the Florida Department of Education’s Office of Articulation, goes on to state that, “as presented, the content of this course is inexplicably contrary to Florida law and significantly lacks educational value.” At the same time, the letter notes that “in the future, should College Board be willing to come back to the table with lawful, historically accurate content, FDOE will always be willing to reopen the discussion.” In short, DeSantis has decided that APAAS does in fact violate Florida’s Stop WOKE Act by attempting to persuade students of at least some tenets of CRT.

DeSantis’s refusal to approve APAAS is entirely justified. Although the College Board has pointedly declined to release the APAAS curriculum, I obtained a copy and wrote about it in September. There I argued that APAAS proselytizes for a socialist transformation of the United States, that it directly runs afoul of new state laws barring CRT, and that to approve APAAS would be to gut those laws.

The White House was asked about this and gave a somewhat sarcastic response to it and called it ‘incomprehensible’:

White House press secretary Karine Jean-Pierre was asked about the move by a reporter and had a response ready.

“It is incomprehensible to see that this ban, or this block, to be more specific, that DeSantis has put forward,” she said. “If you think about the study of black Americans, that is what he wants to block. These types of actions aren’t new, especially from Florida, sadly.”

After clarifying that the White House does not set education curriculum for local schools, Jean-Pierre listed off other aspects of Florida policy the Biden administration finds objectionable.

“Florida currently bans teachers from talking about who they are and who they love,” she said. “We’ve talked about it many times here in this briefing room. They have banned more books in schools and libraries than almost every other state in the country.”

Here’s a clip from the briefing.

KJP is trying her best to make DeSantis sound like a racist when she says “If you think about the study of black Americans, that is what he wants to block.”

That’s complete bullcrap. Gov. DeSantis is fine with African American studies as long as they are factual and accurate. He’s fine with teaching American history as long as it is factual an accurate. What he despises is this woke revisionist garbage that the left wants to teach young people and that’s exactly what this new curriculum is, which is why it is being banned.

KJP also claimed that Florida teachers can’t talk about how they are and who they love, but that’s also garbage. She’s basically regurgitating the “don’t say gay” mantra, which was never accurate in the first place. The ban on the woke LGBT garbage only applied to grades K-3, and in grades higher than 3rd it must be age appropriate.

KJP, just like all the leftists who constantly attack and smear DeSantis, are liars of the worst kind.