The former Mueller prosecutor who asked for the nearly 9 year sentence for Roger Stone has now resigned from the case, effective immediately:

Top Mueller prosecutor Aaron S.J. Zelinsky resigned from Roger Stone’s case, effective immediately, he told the court in a filing, after the Justice Department announced that it planned to change the recommendation to give Stone a lighter sentence, per @kpolantz

Below is his one sentence notice of withdrawal: 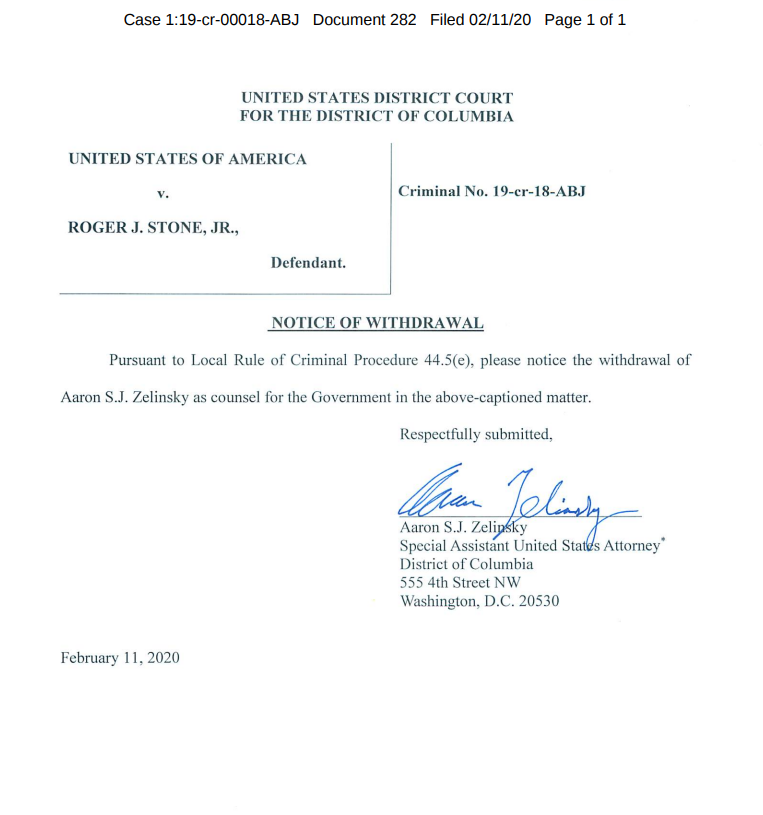 Zelinsky didn’t give a reason for his resignation, but my guess is that it wasn’t of his own volition considering the earlier report that the DOJ leadership was quite unhappy with this sentencing recommendation, calling it ‘extreme’ and ‘grossly disproportionate’.

He’s reportedly not a Mueller prosecutor:

MORE BREAKING: Now a veteran federal prosecutor in DC assigned to Stone case an not from Mueller team, Jonathan Kravis, has resigned his post. Developing…..https://t.co/FFngOWpBNe pic.twitter.com/jDrF9xuCsm

UPDATE: A third prosecutor is now resigned from the Stone case:

UPDATE: The fourth and final prosecutor has now resigned from the Stone case. Wow:

BREAKING: Now, all four federal prosecutors on the Stone case have asked the judge to withdraw from the case.

Michael Marando joins the rest of his team including Aaron Zelinsky, Jonathan Kravis, and Adam Jed.

Mike Marando, the fourth and final prosecutor to take Stone to trial, has told a judge he is withdrawing from the case. Marando is notable for his passionate closing argument to the jury at the trial: “Trial matters,” he told them. @kpolantz

Hopefully we’ll be reporting next that they’ve all four resigned from the DOJ to go work at CNN.