Defensive Coordinator Jack Del Rio, who apologized to the mob the other day for referring to the January 6th Capitol riot a a dust-up compared to the violent 2020 George Floyd protests, has just been fined a whopping amount of money by the Washington Commanders.

More news out of Washington: pic.twitter.com/j9kpxxMUQM

They are fining him $100,000 dollars, all because he dared speak the truth about the Democrat and media obsession with January 6th.

As I told you, I thought his initial comments was quite good (before he apologized). In comparison to the violent mobs of 2020 in the wake of George Floyd’s death, the Capitol riot was essentially a dust-up.

Both were ugly and never should have happened, but the damage to the Capitol building was a picnic compared to what Antifa and the BLMers did in 2020, torching police stations and other buildings, looting stores, all across the country.

But clearly the Washington Commanders (I so hate that name) have bought into the Democrat sensationalism about what happened and are using the fine to make a political statement about it by donating the money to the Capitol Police’s memorial fund.

So they can make a political statement, but Del Rio can’t. Well, this is what he gets for apologizing to the mob because now they are going to silence him.

UPDATE: Washington’s head coach just put out this statement and you are going to hate it… 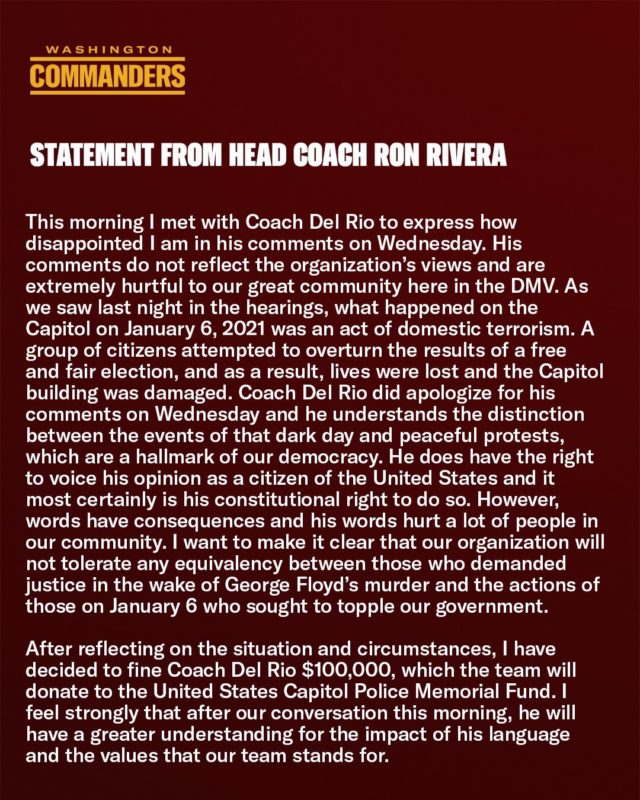