Just one day after he stopped accepting treatment for his brain cancer, John McCain has died at the age of 81.

My heart is broken. I am so lucky to have lived the adventure of loving this incredible man for 38 years. He passed the way he lived, on his own terms, surrounded by the people he loved, in the the place he loved best.

Per John McCain's office, the Senator passed away at 4:28 this afternoon pic.twitter.com/eo10jKUnka

This was from yesterday, but I liked what Palin said:

Prayers for @SenJohnMcCain and his family at this most trying time 🙏🏻 May comfort and peace envelope them. May my friend sense appreciation for his inspiration to serve something greater than self 🙏🏻🇺🇸 - Sarah Palin pic.twitter.com/5KbI3IpUel

UPDATE: This is a good sentiment from Lindsey Graham, one of McCain’s best friends:

America and Freedom have lost one of her greatest champions.

….And I’ve lost one of my dearest friends and mentor.

My deepest sympathies and respect go out to the family of Senator John McCain. Our hearts and prayers are with you! 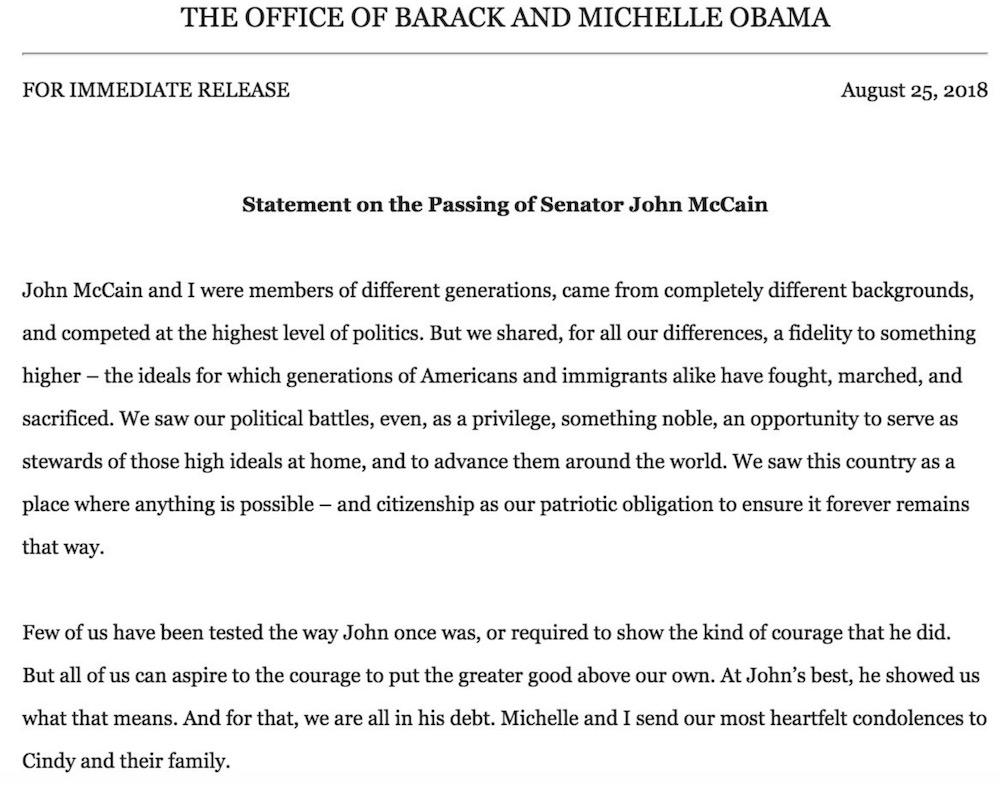 UPDATE: Here’s a very poignant message from the man about his own life:

“I’ve had the good fortune to spend 60 years in service to this wondrous land,” he said. “It has not been perfect service, to be sure, and there were probably times when the country might have benefited from a little less of my help.

“But I’ve tried to deserve the privilege as best I can, and I’ve been repaid a thousand times over with adventures, with good company, and with the satisfaction of serving something more important than myself, of being a bit player in the extraordinary story of America,” he said. “And I am so very grateful.”

UPDATE: I was alerted to this bizarre coincidence from a commentor:

Today is the ninth anniversary of the death of Sen. Ted Kennedy, from the same brain cancer that has taken John McCain.

That is really remarkable. There’s another historical anomaly like this one in U.S. history. Making this even more odd.

I know many here disagreed with him often (I did too), but this is a time to respect the service he paid, and not try to collect on petty grudges.