A federal judge just blocked Biden’s federal employee vaccine mandate nationwide, saying he doesn’t have the authority to implement it. Which is great news, right?

But the media wants to make sure you know that the judge who blocked it was appointed by Trump. In fact the AP put it right in the title: 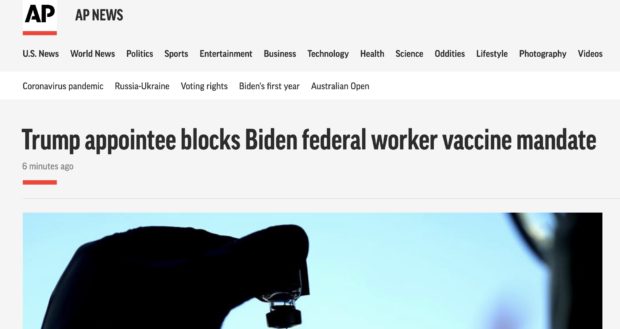 Rick Grenell smacks the AP’s Julie Pace, asking her why they do this only for Trump appointed judges:

Do you put who appointed the judge in every headline? Or just when it’s a Trump appointee?

Here’s what the AP wrote about it:

A U.S. judge in Texas issued a nationwide injunction on Friday barring the federal government from enforcing President Joe Biden’s requirement that federal workers without qualifying medical or religious exemptions be vaccinated for COVID-19.

Judge Jeffrey Brown, who was appointed to the District Court for the Southern District of Texas by then-President Donald Trump, ruled that opponents of Biden’s vaccination mandate for federal employees were likely to succeed at trial and blocked the government from enforcing the requirement.

Brown wrote that at issue was whether the president “can, with the stroke of a pen and without the input of Congress, require millions of federal employees to undergo a medical procedure as a condition of their employment.” He added, “That, under the current state of the law as just recently expressed by the Supreme Court, is a bridge too far.”

The Justice Department said it would appeal the ruling.

Regardless of the AP’s hostility and overt bias, this is truly great news. Despite the Supreme Court’s mixed bag last week in leaving the health care worker vaccine mandate in place while nixing the business vaccine mandate, I truly hope they get this one right because it’s surely headed their way.