Nigeria has just banned Twitter after the company removed one of the president’s tweets that they claimed violated their policies.

Here’s the story via CNET:

Nigeria’s Federal Ministry of Information and Culture said in a series of tweets Friday that the government has suspended Twitter “indefinitely” because of “persistent use of the platform for activities that are capable of undermining Nigeria’s corporate existence.”

On Wednesday, Twitter removed a tweet by Buhari that it said violated its “abusive behavior” policy, Reuters reported. The tweet referenced the civil war in Nigeria’s Biafra region in the late 1960s and was directed at present-day secessionists who’ve been blamed for attacks on government buildings, the news outlet noted, adding that Buhari served in the army during the civil war and was Nigeria’s military ruler in the 1980s.

“Those of us in the fields for 30 months, who went through the war, will treat” the secessionists “in the language they understand,” Buhari’s removed tweet said, according to Reuters, which noted that a million people were killed in the civil war.

I remember a time when Twitter thought it was in the public’s interest to see and hear what world leaders had to say, the good and the bad. Oh the good old days. Now they’ve made themselves the world’s speech police, essentially telling people what they can and can’t say. 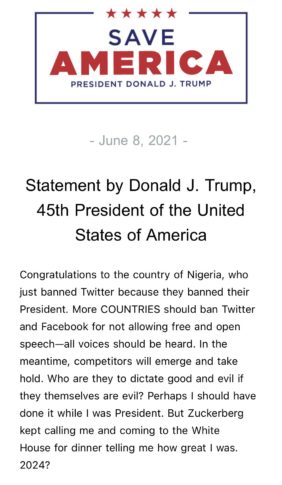 I normally hate when governments tell people what they can and can’t access. But given what we saw in our own country last year, with Twitter playing politics and using their platform to help Joe Biden get elected, I have zero sympathy for them. They deserve this because they bring it all on themselves.