President Trump has just responded to the two year ban the self-appointed overlords at Facebook just imposed on him: 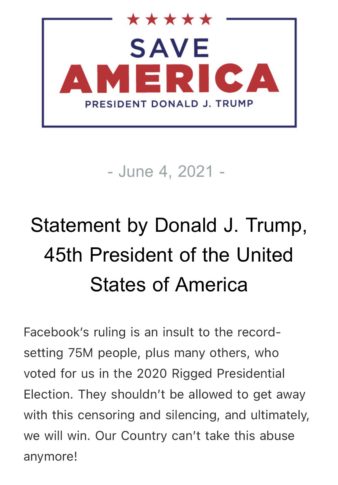 Here’s what the statement says:

Facebook’s ruling is an insult to the record-setting 75M people, plus many others, who voted for us in the 2020 Rigged Presidential Election. They shouldn’t be allowed to get away with this censoring and silencing, and ultimately, we will win. Our Country can’t take this abuse anymore!

He’s not wrong. Many in our country do hate what these social media fascists are doing, with more and more abandoning them every day. It’s unfortunate that, as Bill Barr suggested before, they lied to the American people with their free speech bait and switch in order to amass millions upon millions of users and now they turn on them, mostly conservatives.

What’s even sadder is that I don’t expect Congress will ever really reform Section 203 to fix this problem. And the competition that exists now just ends up with us conservatives balkanizing ourselves for our protection. Short of Republicans winning supermajorities in both houses (it would take that many, if not more to overcome the RINOs), I don’t know that this problem with ever be truly addressed.

I love how Trump says ‘the next time I’m in the White House’. So I guess he’s definitely running for president?