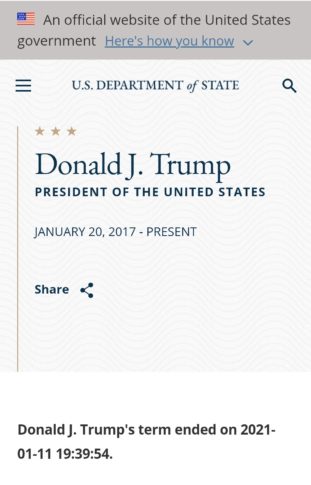 Some were questioning if this was a hack or an error. According to Buzzfeed News, it was a disgruntled staffer who did it:

The State Department has since taken it down completely. Apparently Pence’s biography had also been changed and I would assume it’s been taken down as well.

Ryan Girdusky, who has had good sources in the past, says he’s heard it was just an error:

A source told me, it's an error https://t.co/lNaD3nMAh0

UPDATE: OAN’s Jack Posobiec suggests Buzzfeed is right, that it is a disgruntled staffer: