Roger Stone has just been sentenced by Judge Amy Berman Jackson. She put the guidelines for his sentencing between 5.8 years to 7.25:

Jackson notes the she now, under the guidelines, has Stone at "5.8-7.25 years." But she can still apply a downward departure.

Judge says the prosecution recommendation was correct legally and according to DOJ policy. But says she wouldn't have sentenced to 7 to 9 years despite "unprecedented" government actions of past week.

U.S. District Judge Amy Berman Jackson said she would not discount tougher sentencing guidelines that apply to witness tampering, one of the seven charges Roger Stone was convicted of in a November trial. "The guideline plainly applies," Jackson said.

And then came down with this sentence of 40 months:

BREAKING –> Roger Stone, political operative and longtime confidant of President Trump, is sentenced to 40 months in prison by a federal judge who was particularly harsh about his lies to Congress, witness tampering, obstruction.

UPDATE: The judge deferred the sentencing for appeal for a new trial:

Jackson also gives 24 months of supervised release per each count, once sentence is served. Jackson defers execution of sentence, giving Stone chance to appeal for a new trial. Court is adjourned.

At this point I think everyone knows that Trump intends to pardon Stone, or at the very least commute his sentence. Even this morning he pinned a video of Tucker Carlson on his Twitter arguing that Stone should be pardoned.

I should also note that Stone can still get a retrial. Jackson wanted to do the sentencing first before she considered the retrial motion:

JUST IN: The federal judge overseeing the Roger Stone case says sentencing will proceed on Thursday as scheduled.

Judge Amy Berman Jackson will also consider Stone’s request for a retrial and rule on it.

In regards to the sentencing, if you want to know the gist of what Jackson said right before sentencing, you can click and read this thread:

Jackson says "Unsurprisingly, I have a lot to say."

Earlier this morning, one of the big things Jackson focused on this morning was Stone’s threats to Randy Credico:

US District Judge Amy Berman Jackson sided with DOJ, agreeing that the sentencing recommendation for Stone should be much higher because of his threats to Randy Credico.

Prosecutor said: “the defendant threatened both his personal safety and his pet.” https://t.co/cWChhALGS6

Judge Jackson finds a harsher sentence should apply here because Stone threatened or intimidated a juror, provided false info to a judge & potentially threatened her. "…The court should not sit idly by, shrug its shoulders and say, 'That's just Roger being Roger.'"

Something else Jackson brought up was this photo Stone put of her on his instagram with cross hairs on it: 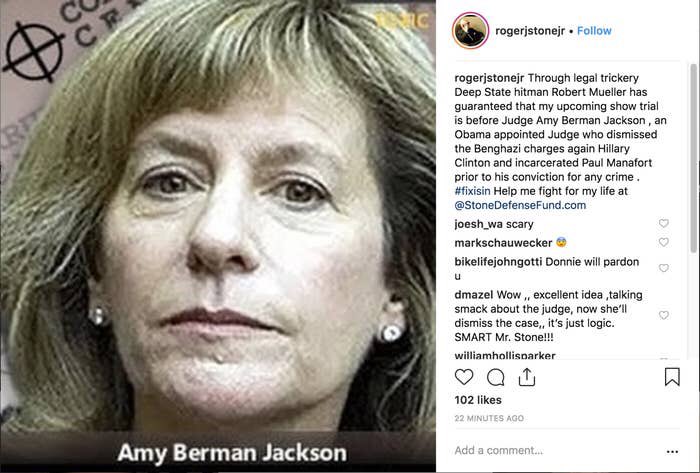 I expect Trump to be tweeting about the sentencing soon and we’ll bring that to you when it happens.