Yesterday we reported that 17 states joined the election fight with Texas by filing amicus briefs with the court. Well today, six of those states are asking the Supreme Court to ‘intervene’ with Texas in the election case, or officially join with the plaintiffs on the legislation: 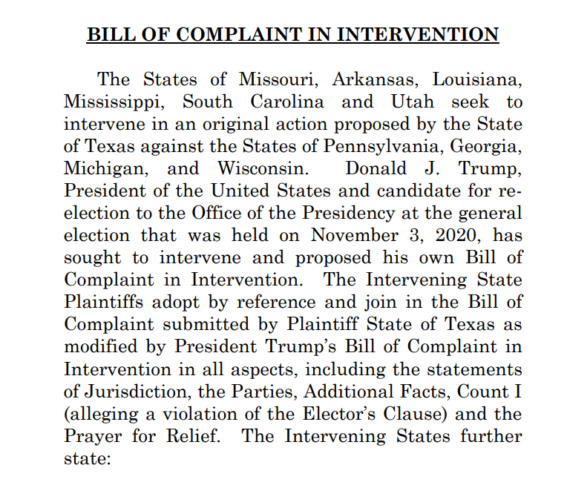 President Trump requested to ‘intervene’ in the case yesterday, which is mentioned in the filing of these six states which are Missouri, Arkansas, Louisiana, Mississippi, South Carolina, and Utah.

“In law, intervention is a procedure to allow a nonparty, called intervenor (also spelled intervener) to join ongoing litigation, either as a matter of right or at the discretion of the court, without the permission of the original litigants. The basic rationale for intervention is that a judgment in a particular case may affect the rights of nonparties, who ideally should have the right to be heard.”

This comes just hours before the 3pm deadline in which the four states being sued must submit their responses. I fully expect to hear something from the high court on this later today or tomorrow. We’ll keep you posted as soon as we hear something.

Below is the full intervention request: