Today the Supreme Court ruled that the state of Maine violated the first amendment, with respect to free exercise of religion, when they banned public voucher program funds from being used to send children to religious schools.

The Supreme Court STRIKES DOWN a Maine education program that provides tuition assistance for students to attend some private schools but excludes schools that provide religious instruction. SCOTUS says the exclusion of religious schools is unconstitutional.

In this case Roberts sided with the 6-3 conservative majority and wrote the opinion:

Here's the opinion from John Roberts in Carson v. Makin: https://t.co/guXt0bJwzJ. The vote is 6-3 along ideological lines, with Breyer, Sotomayor, and Kagan in dissent.

This is great news because it means states can no longer discriminate against Christian schools when it comes to education. That was the issue before the court, with the parents who brought the lawsuit wanting to send their children to both a Christian school and a Jewish academy.

Here’s the summary of the opinion: 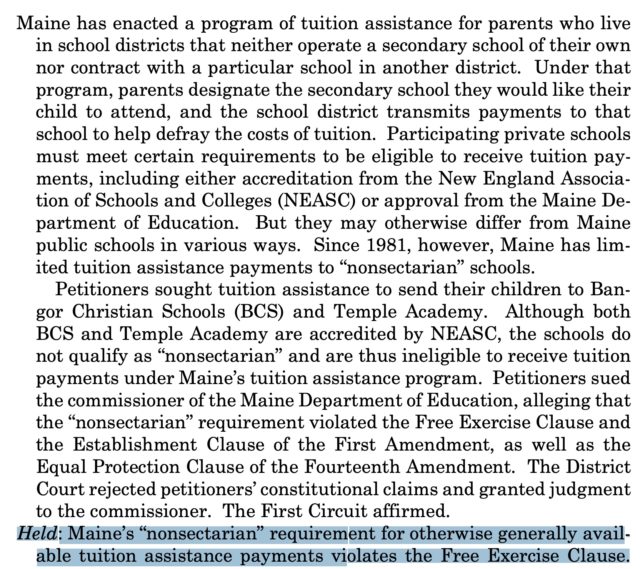 You can read the full opinion here.

The next day for Supreme Court cases will be Thursday morning. There are only 13 cases left to release and, as always, I’ll be monitoring it live for the Dobbs (Roe v Wade) or Bruen (2nd amendment) cases.