Ted Cruz has just released a statement after the OUTRAGE over his family trip to Cancun: 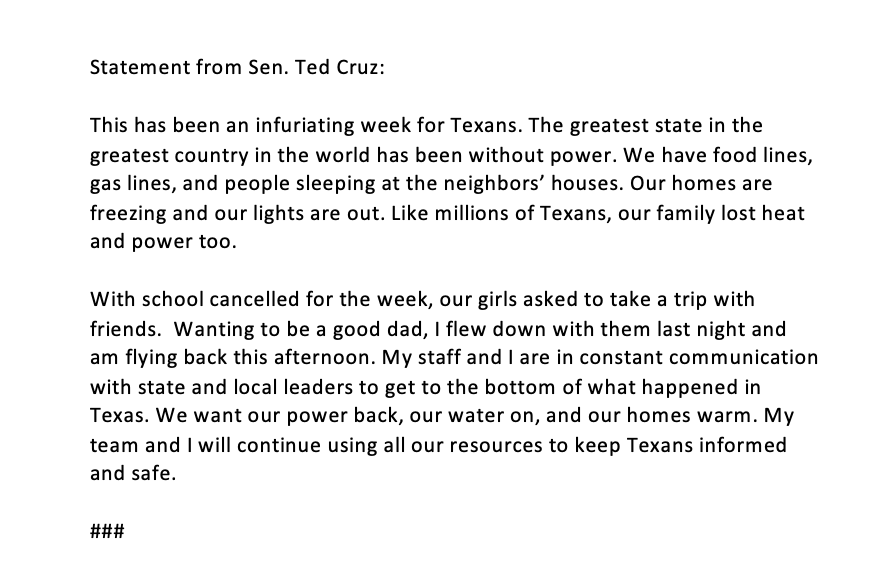 There’s been an uproar today over Cruz taking a trip to Cancun with his family while Texas is in the midst of a winter storm.

I get the optics of the trip look bad, but as he said in his statement, his daughter “asked to take a trip with friends” because school was canceled for a week and he wanted to be a good dad and take her there.

TMZ casts doubt on his honesty, saying his wife was with him and that she could have done it, and that he had a suitcase.

But given what we know about Ted Cruz, I take him at his word on these kind of things. Just like with Trump, the media has gotten into trouble many times for making assumptions about things they don’t understand.

What I don’t understand is why something like this outrages people, but they couldn’t care less about Governor Cuomo killing old people with his outrageous nursing home policies and then covering it up.

Just kidding, I totally understand. Ted Cruz is a Republican and Cuomo is a Democrat. Yes, it really is that simple.