The Supreme Court just paved the way for New York prosecutors to get their hands on Trump’s taxes by denying a Trump motion to block a lower court decision releasing his taxes: 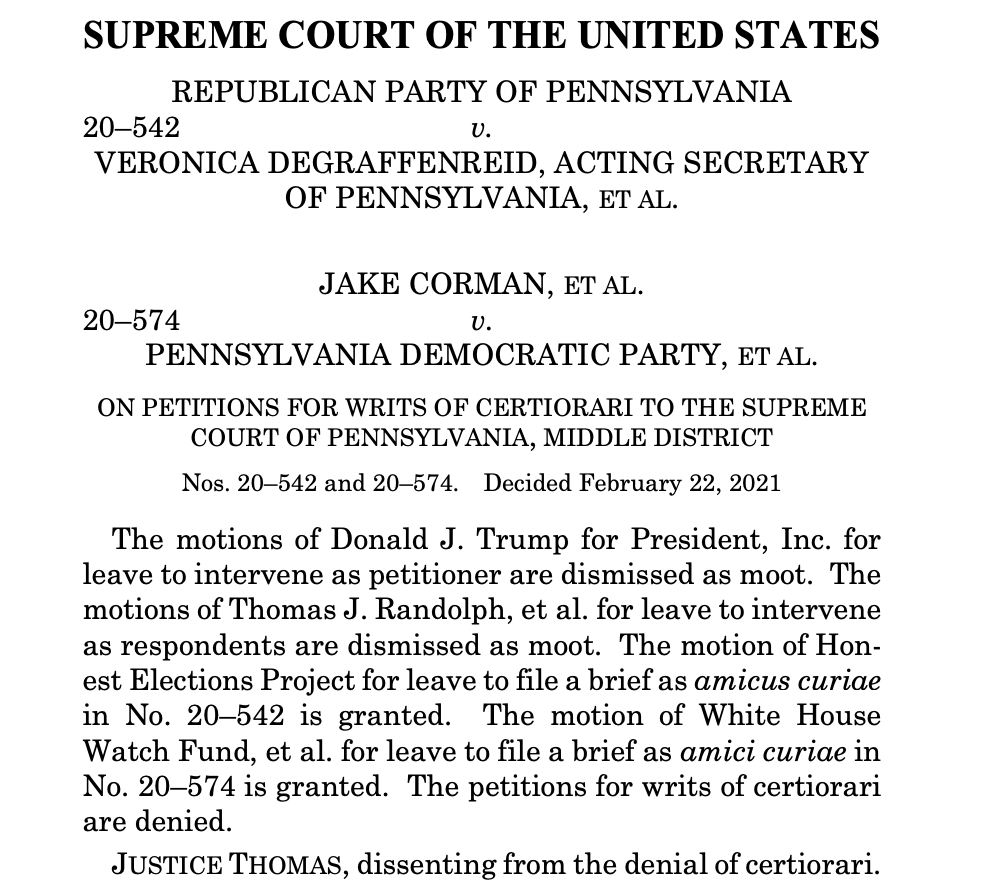 As you can see the order is unsigned. But it does state that Justice Thomas dissents, which means he clearly doesn’t agree.

Here’s more from The Hill:

The Supreme Court on Monday rebuffed a bid by former President Trump to shield his tax returns and other financial records from a New York grand jury subpoena.

The justices issued the order in the long-running dispute between Trump and Manhattan District Attorney Cyrus Vance (D) without comment or noted dissents.

The court’s order comes in response to an emergency request Trump filed in October to the Supreme Court after losing several rounds in the lower courts.

Vance’s office has sought Trump’s records since 2019 when a New York grand jury issued a subpoena to Trump’s accounting firm, Mazars USA, for eight years of the former president’s personal and business tax returns and other financial records.

Since then, Trump has tried unsuccessfully to fend off the request. His filing in October marked the second time that Trump asked the justices to shield his records.

Vance’s office is looking into payments made to silence two women who allege they had affairs with Trump, including adult-film star Stormy Daniels. Trump’s former attorney and fixer, Michael Cohen, who pleaded guilty to bank fraud, tax fraud and campaign law violations, has said the payments were made in order to influence the outcome of the 2016 presidential election.

Additionally, Vance’s office has said its subpoena is part of an investigation into possible financial crimes by the Trump Organization.

Well we know what will happen from here. The taxes will get leaked out to the New York Times or Washington Post and the media and Democrats will scandalize everything they can find in order to stop Trump from running again. The resistance continues.