The White House just deleted a tweet hailing Joe Biden on social security after readers added a fact-check to the tweet.

The tweet came from the White House account and according to Politiwoops, it was deleted over two hours ago:

The reason the White House deleted it is because Twitter users in the “Birdwatch” program added context to the tweet, exposing the lies by the White House: 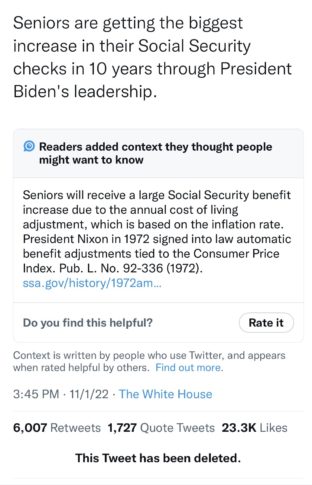 I know a person in the “Birdwatch” program, which is run by Twitter, and only certain Twitter users are in the group. Not sure how many, but these are the people responsible for the context getting added.

What I learned is that for context to be added, there needs to be bipartisan agreement. Which means it’s more rare to see context on a tweet because many times people are fighting about it and there’s never a consensus.

So for this context to get added it meant a lot of people agreed with it and believed it needed to be there because of the White House’s lie.

Now you know why the White House deleted it.

Check this out if you are interesting in singing up for the Birdwatch program. Anyone can join.