Norah O’Donnell with CBS News claimed tonight that the FBI does not have Trump’s passports, suggesting that Trump is lying about the FBI taking them.

NEW: According to a DOJ official, the FBI is NOT in possession of former President Trump's passports. Trump had accused the FBI of stealing his three passports during the search of his Mar-a-Lago home.

We are also learning tonight that if any items not contained in the warrant were retrieved during the FBI search at Mar-a-Lago, they will be returned.

Listen to how her NBC News counterpart put it:

A Department of Justice official tells me passports belonging to former Pres. Trump are NOT in the possession of the FBI and have been returned.

She again makes it sound like Trump is lying until you read to the end where it says “and have been returned”.

So yes, the FBI did take them. Trump wasn’t lying about anything!

In fact Trump posted an email from the FBI proving they took them: 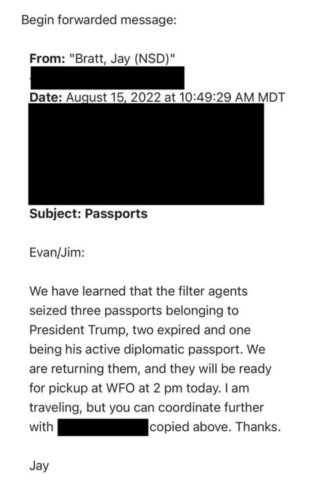 The garbage media is absolutely garbage. They are arguing a technicality just to try and make Trump look like a liar. Trump derangement syndrome is still alive and well.