Enes Kanter, the Turkish-born center for the Boston Celtics whose family has been imprisoned in Turkey by Sultan Erdogan, put out a video yesterday criticizing the Chinese president and calling for the liberation of Tibet from China’s oppressive rule over the country:

More than 150 Tibetan people have burned themselves alive!! — hoping that such an act would raise more awareness about Tibet.

I stand with my Tibetan brothers and sisters, and I support their calls for Freedom.#FreeTibet #FreedomShoes pic.twitter.com/MKxfs1l7GA

He made his statement while wearing a shirt with the Dalai Lama’s face on it.

China didn’t appreciate this video at all and has now stopped steaming the Celtic’s games in China as a result: 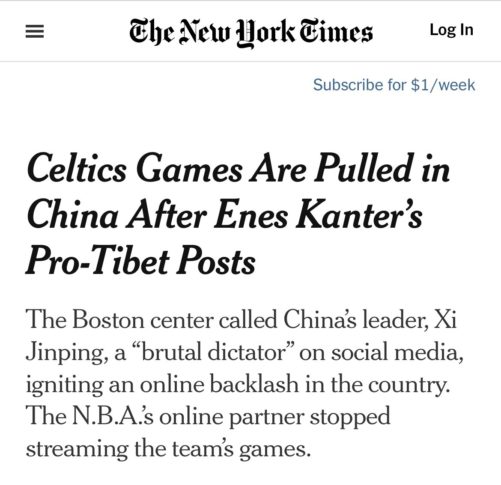 One person on Twitter drew an apt comparison between Kanter and Kaepernick:

One of them has a Nike contract and a Netflix deal and is worshipped by mainstream media and the elites.

The other is persona non grata whose family is jailed because of his activism, and does not have a Nike contract because Nike does business in Turkey. pic.twitter.com/FWsGxvSbzS

She’s absolutely right. Kanter constantly has international warrants for his arrest issued by Turkey because he dares criticize Turkey’s Islamic dictator and stands up for freedom. His family has been imprisoned by Erdogan. And yet he continues to use his voice to speak out, standing up for what he believes in even if it means sacrificing everything.

This is a picture of #DictatorErdogan regime issuing my 10th arrest warrant for me in the last 4 years.
The reason is me standing up for Human Rights and Political Prisoners who are getting tortured and raped.

I’m NOT giving up pic.twitter.com/dN06OwRluo

Colin Kaepernick is nothing but a commie who both disrespects and hates America, yet is celebrated as some kind of hero by the media and Hollywood.