At least CNN did the right thing here by taking her out of Israel:

HUFFINGTON POST – CNN has removed correspondent Diana Magnay from covering the Israeli-Palestinian conflict after she tweeted that Israelis who were cheering the bombing of Gaza, and who had allegedly threatened her, were “scum.”

“After being threatened and harassed before and during a liveshot, Diana reacted angrily on Twitter,” a CNN spokeswoman said in a statement to The Huffington Post.

“She deeply regrets the language used, which was aimed directly at those who had been targeting our crew,” the spokeswoman continued. “She certainly meant no offense to anyone beyond that group, and she and CNN apologize for any offense that may have been taken.”

The spokeswoman said Magnay has been assigned to Moscow. 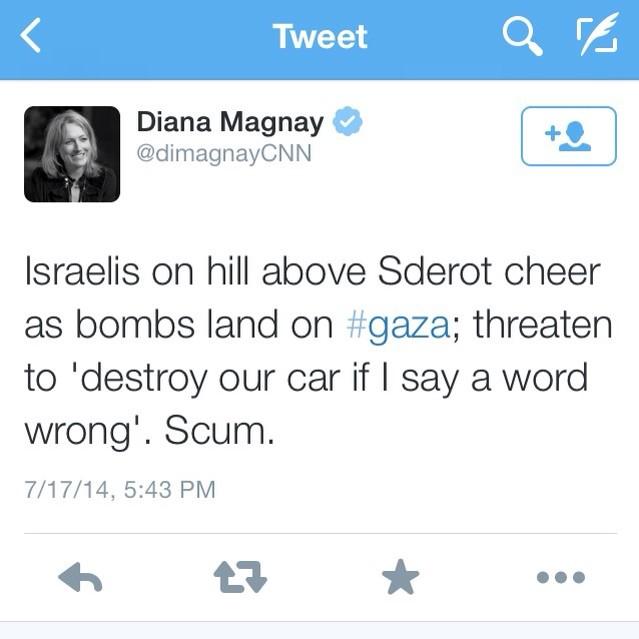 Magnay appeared on CNN Thursday from a hill overlooking the Israel-Gaza border. While she reported, Israelis could be heard near her cheering as missiles were fired at Gaza.

After the liveshot, Magnay tweeted: “Israelis on hill above Sderot cheer as bombs land on #gaza; threaten to ‘destroy our car if I say a word wrong’. Scum.” The tweet was quickly removed, but not before it had been retweeted more than 200 times.

The removal of Magnay comes a day after NBC News pulled Ayman Mohyeldin from Gaza.