Last night, after the three hourlong Rogan interview with CNN’s chief doctor Sanjay Gupta, Don Lemon had Gupta on to try and undo the damage from the Rogan interview and he did it in the slimiest of ways:

CNN’s @DonLemon: “It is not a lie to say that [Ivermectin] is used as a horse de-wormer. I think that’s important. And it is not approved for Covid."@drsanjaygupta: “Correct … If you look at the data, there is no evidence that it really works [against Covid]." pic.twitter.com/eDpJUxrsqY

Don Lemon is clearly trying to deceive people about the Rogan interview, suggesting that CNN told the truth about Ivermectin being used as a horse dewormer.

But that wasn’t Rogan’s point. CNN lied about Rogan himself, saying that he was taking a horse dewormer when in reality he was taking a prescription of Ivermectin from his doctor, which is made for people. CNN was clearly trying to smear and demean Rogan by saying this, and that’s what Rogan was confronting Gupta over in their interview. And Gupt admitted in the interview that CNN shouldn’t have said that.

But then with Don Lemon last night, he dresses it up in a way that Gupta can say ‘yes that’s correct’ and pretend that CNN didn’t do anything wrong. It’s despicable and misleading.

Look, here’s the video evidence from September 1st where CNN’s Anderson Cooper claimed Rogan was taking medicine made for livestock:

Cooper's September 1 promo: "Joe Rogan, a popular comedian and podcaster who's told his listeners the COVID vaccine is not necessary for young people, just disclosed he has COVID. He also acknowledged taking a controversial treatment designed for animals. That's coming up." pic.twitter.com/knUj0Ydph0

And here’s a couple of chyrons saying the same thing, one of which was on Don Lemon’s show labeled ‘Don’s take’: 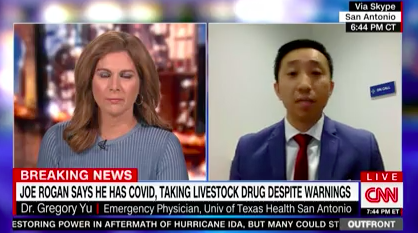 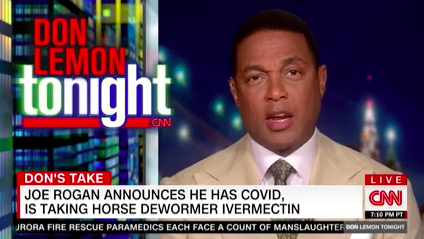 CNN is the absolute worst. They started this horse dewormer nonsense and I’m glad Joe Rogan forced Gupta to answer for it.