Galaxy brain John Harwood has a theory. His theory is that, given the state of a person as white and Christian, it is the case that “fear” makes that person “blanket” oppose what would otherwise be seen as a welcome Biden agenda of abortions and carbon taxes all around.

That ain’t me being flip. That’s this CNN reporter’s actual theory. He’s all proud of it and everything. 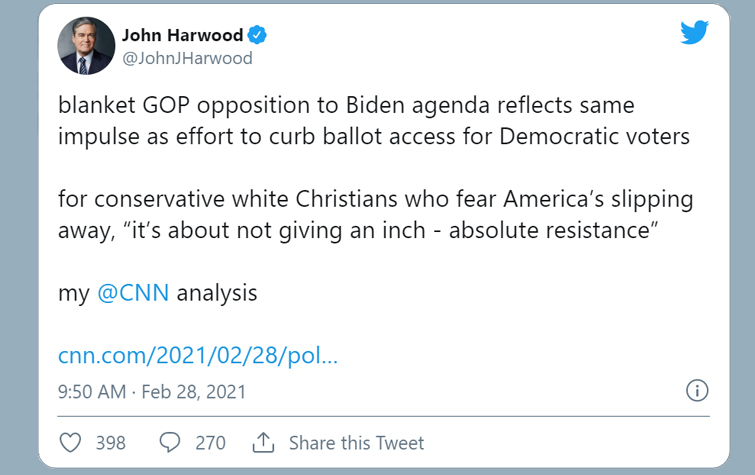 But that didn’t translate to Republican support for the measure. When the House passed the bill last week, not a single GOP lawmaker voted yes.

That offered a bookend to developments in state capitals across the nation, where Republicans seek to restrict access to the ballot. After Biden defeated Donald Trump in a presidential election free of large-scale voter fraud, Republican legislators have proposed curbing voting methods used last November in the name of stopping large-scale fraud.

In both cases, Republicans defied broad signals from the political marketplace. Instead, they heeded the defiant partisan impulse that Trump sounded before leaving office: “If you don’t fight like hell, you’re not going to have a country anymore.”

John. Buddy. Don’t sniff your own farts. It ain’t healthy.

This non-partisan serious analysis from a political expert on why meanie republicans won’t just love what Biden wants them to includes quotes from experts, of COURSE, because that is the way.

“It really is about not giving an inch anymore — this sense of absolute resistance,” says Robert P. Jones, director of the Washington-based Public Religion Research Institute and author of “The End of White Christian America.”

Maybe he can interview those cows about Chick-fil-A next.

Y’all, I can’t even begin to describe the tragic hilarity of this truly awful dump John Harwood took on CNN’s website.

For almost all of American history, White Christians have represented a large majority of the US population and controlled the levers of government power. But that majority had shrunk to just 54% by 2008 when Barack Obama won election as the first African American president and personified the nation’s changing demography.

Trump has personified resistance to that change with his turn-back-the-clock call to “Make America Great Again.” Faith in his singular mission proved so strong that at last summer’s nominating convention Republicans didn’t even offer a governing platform.

I’m not messing with you, that’s actually in there.

It’s the most rancid, bigoted, closed-minded, Big City snob, elitist trash I’ve seen on CNN’s website since at least 20 minutes before it was posted.

It’s open season. They can say and do whatever they want and they know it. They don’t even have to try very hard to make it presentable (obviously.)

Tomorrow we get to see John boy pimp this tarted up sow on the airwaves all day, betcha. You just know Brianna “Screech” Keilar is going to have some yelling about the same topic.

This whole world is just a morbid comedy with a tragic ending not too far off.