Right now Herschel Walker is in a extremely close race with Democrat Raphael Warnock and the Democrat media is doing their best to help Warnock defeat Walker.

Also yesterday the Daily Beast wrote an article claiming a pro-life Walker pushed his girlfriend to have an abortion in 2009 and paid for it.

It’s the last one that has really gotten Walker fighting mad, because he says it’s a flat-out-lie.

First, here’s a snippet from the Daily Beast hit piece:

Herschel Walker, the football legend now running for Senate in Georgia, says he wants to completely ban abortion, likening it to murder and claiming there should be “no exception” for rape, incest, or the life of the mother.

But the Republican candidate has supported at least one exception—for himself.

A woman who asked not to be identified out of privacy concerns told The Daily Beast that after she and Walker conceived a child while they were dating in 2009 he urged her to get an abortion. The woman said she had the procedure and that Walker reimbursed her for it.

She supported these claims with a $575 receipt from the abortion clinic, a “get well” card from Walker, and a bank deposit receipt that included an image of a signed $700 personal check from Walker.

The woman said there was a $125 difference because she “ball-parked” the cost of an abortion after Googling the procedure and added on expenses such as travel and recovery costs.

Additionally, The Daily Beast independently corroborated details of the woman’s claims with a close friend she told at the time and who, according to the woman and the friend, took care of her in the days after the procedure.

The woman said Walker, who was not married at the time, told her it would be more convenient to terminate the pregnancy, saying it was “not the right time” for him to have a child. It was a feeling she shared, but what she didn’t know was that Walker had an out-of-wedlock child with another woman earlier that same year.

Asked if Walker ever expressed regret for the decision, the woman said Walker never had. Asked why she came forward, the woman pointed to Walker’s hardline anti-abortion position.

Walker responded last night to this and said he was filing a defamation lawsuit this morning. Here’s his response: 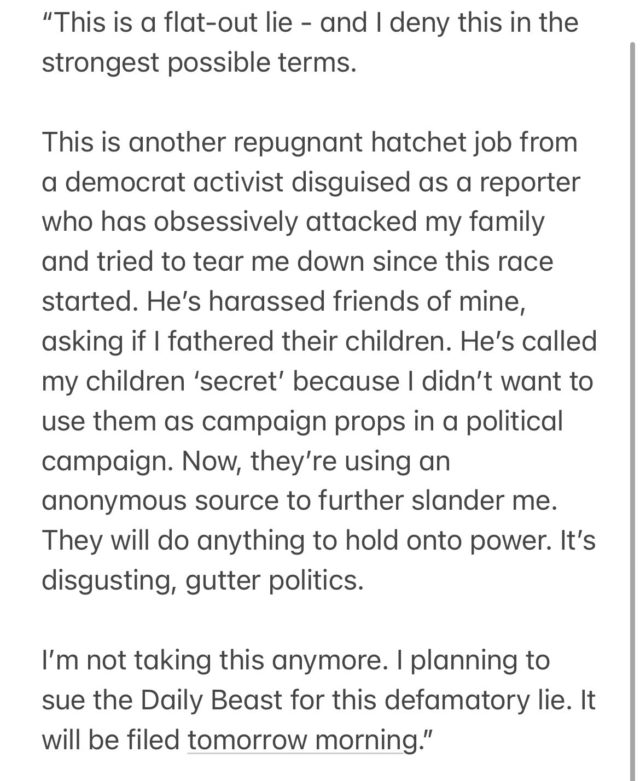 Given the disgusting tactics used against Bret Kavanaugh, what Walker says seems absolutely believable to me. This is what Democrats do and they will use whatever means, lies and all, to destroy conservatives they deem as a threat. And he’s clearly a threat to their power in the Senate.

I hope the fine people of Georgia don’t put much weight on what these leftist publications have to say, because it’s probably utter garbage.

Dems oppo drops that are even tenuously based in reality go to NYT or WaPo; Daily Beast indicates something so fictional 5-10 other liberal pubs already passed on it. https://t.co/EVgnkLebdD