David Daleiden, who exposed Planned Parenthood’s selling of aborted baby body parts, has just been fined a whopping $195,000 dollars for violating a court order not to publicly release videos he recorded at the National Abortion Federation:

DAILY WIRE – “The federal judge presiding over related civil lawsuits, District Judge William Orrick, had held that criminal defense counsel’s use of the videos violated a gag order he imposed in one of the federal civil actions. Daleiden and his defense counsel appealed, arguing that Orrick had improperly imposed a criminal contempt penalty without granting the accused due process and that the federal civil injunction should not apply to Daleiden’s state criminal proceeding,” a statement from the Thomas More Society, representing Daleiden, outlined.

The Ninth Circuit refused to hear this appeal.

They also refused to hear a second appeal to be switched to an unbiased judge:

The Ninth Circuit also denied an appeal to have Daleiden’s federal civil cases reassigned to an impartial judge who does not have a history of public support for Planned Parenthood, as Judge Orrick does.

“You’ll recall that Judge Orrick has close ties to Planned Parenthood, and his wife is an outspoken abortion activist. This is another frustrating setback for David — especially after … the U.S. Supreme Court declined to hear our appeal of the ‘gag order’ injunction Judge Orrick hit David with at the request of the National Abortion Federation,” noted Tom Brejcha, president and chief counsel of the Thomas More Society, in a press release last year.

According to Erick Erickson, this left-wing judge didn’t just support Planned Parenthood, he founded one of them:

It turns out that judge had previously founded and run a Planned Parenthood operation and refused to recuse himself.

So now Daleiden is stuck with a biased left-wing judge and a fine for $195k, all because he dared expose the murderous Planned Parenthood for selling aborted baby parts. Erickson said the money to pay the fine will be held in escrow until the trial ends.

A GoFundMe page has been started for Daleiden in order to help him pay for this fine. It’s already raised almost $15,000: 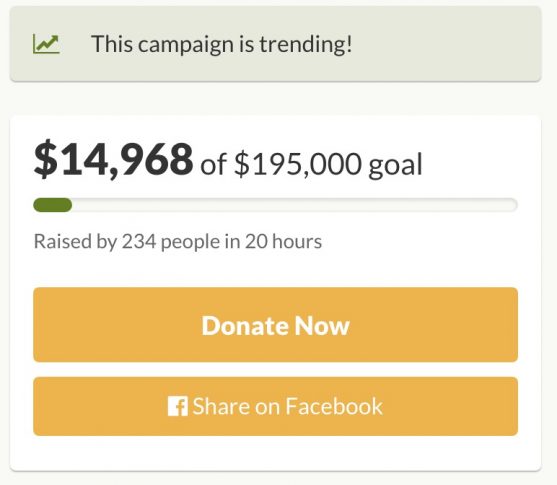