“Thank you for watching our abortion.”

A panel moderated by @lizzwinstead at Netroots Nation demonstrates terminating an early pregnancy with a watermelon. pic.twitter.com/bI3I3itUG7

“Abortion is on the ballot, every ballot, all the time,” she tells me after the panel.

They call this “basic healthcare” that’s “easy to do”, and this is why they fight for ‘advanced technicians’ being able to perform these eight-week abortions.

When doing the abortion the woman referred the fetus as ‘pregnancy tissue’.

Here’s what that ‘pregnancy tissue’ looks like at eight weeks according to i-am-pregnant.com: 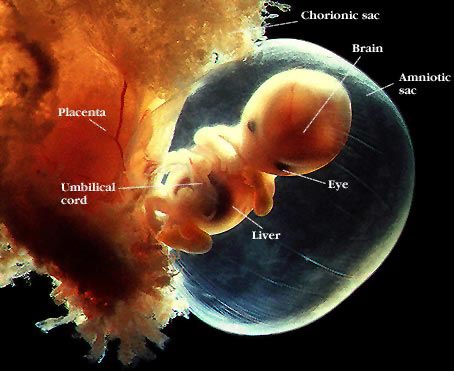 While the baby at eight weeks is about the size of a pinto bean, it clearly already has its basic form with eyes, a brain, fingers and toes.

And yet to these barbaric murderers this baby is just worthless, something to be discarded over convenience.

As someone in the twitter comments suggested, why not show a film of an actual abortion with all its brutality instead of this pathetic nonsense. I’ll tell you why. Because they want to go on promoting their delusion that this isn’t really a baby, but just a piece of tissue that might as well be a watermelon. If the truth were known and promoted, they’d all be pro-life.