The Daily Caller got their hands on a Democrat slideshow that highlights their amnesty for illegals proposal and how much they claim it would cost: 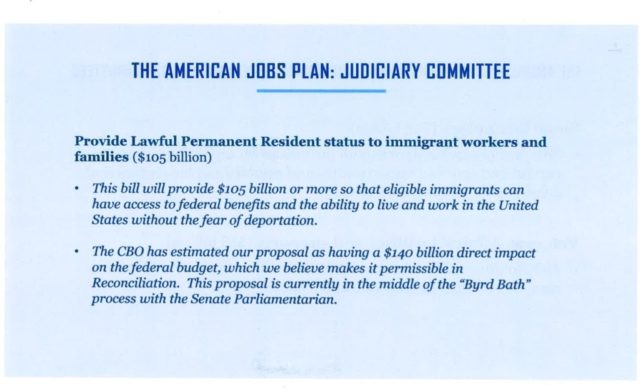 Senate Democrats highlighted an amnesty proposal in their $3.5 trillion reconciliation bill during their weekly Tuesday lunch that would give $105 billion to illegal immigrants in the U.S., a slideshow obtained by the Daily Caller shows.

Democrats presented a slideshow during their lunch that explained what is in their package. One of the slides highlighted their effort to “provide permanent resident status to immigrant workers and families.” The slide says that the $105 billion will go to “eligible immigrants” who will no longer have to worry about being deported.

“This bill will provide $105 billion or more so that eligible immigrants can have access to federal benefits and the ability to live and work in the United States without the fear of deportation,” the slide reads.

“The CBO [Congressional Budget Office] has estimated our proposal as having a $140 billion direct impact on the federal budget, which we believe makes it permissible in Reconciliation. This proposal is currently in the middle of the ‘Byrd Bath’ process with the Senate Parliamentarian,” the slide continues.

“We believe immigration is a critical element in reconciliation for three reasons,” Durbin said. “First reason: How many years have we all complained that the immigration system in America is broken and needs to be fixed?” Durbin then said that the bill will bring $10 back to the U.S. economy for every dollar spent on immigrants, Fox News reported.

Durbin also said the U.S. needs more workers and that giving illegal immigrants legal status “gives them a chance to be a functioning part of this economy.”

$140 billion is what they say it will cost, and that’s the cost each year and only the beginning. As they grant amnesty to more and more illegals that Biden is allowing to infiltrate our country, the cost will balloon. You can see clearly that they want these illegals on the taxpayer dole, saying that they “can have access to federal benefits”.

Fortunately, even with this simple-majority reconciliation process, both Manchin and Sinema are refusing to support the bill. So despite the ‘Byrd Bath’ they reference, they don’t have the votes to pass this out of the Senate. I pray that neither Manchin or Sinema changes their mind.