A 50-year-old former Marine wearing a MAGA hat was kicked out of a Manhattan bar last week.

The bartender of Jake’s Dilemma on the Upper West Side of Manhattan suggested to the former Marine that it was because of his hat.

While the owner admits his employee was wrong to make this political, he says the former Marine was being disruptive and making others uncomfortable with anti-Semitic and obnoxious remarks.

DAILY MAIL – A Trump supporter claims he was thrown out of a New York bar for wearing a MAGA-hat while eating his meal.

Former Marine Dion Cini, 50, was asked to leave Jake’s Dilemma on the Upper West Side last Wednesday after consuming three beers and fish and chips.

While his hat was not of immediate offense to the bartender, he was asked to leave around an hour after he sat down, allegedly because he starting making anti-semitic remarks and obnoxious remarks.

In a video of the moment he was turfed out, Cini, who admits he wears his hat in Manhattan every day to get a reaction from Trump critics, can be heard asking the bartender repeatedly: ‘It’s because I’m wearing my hat, right.’

He flipped the camera back on himself to show off his red MAGA visor and added: ‘It’s a Trump hat.’

In footage he posted on Facebook, the bartender says nothing but gives him a thumbs up.

Before we continue, you should know this is the same former Marine who got banned from all Walt Disney World properties after holding up a Trump 2020 sign on a rollercoaster ride. Even in the article he admits that he likes to get a reaction by wearing MAGA gear.

Here’s what the owner said:

The bar owner has since admitted that he was not thrown out for his hat at all but for the ‘obnoxious’ and ‘racist’ remarks that he had been making.

‘He was being very loud and obnoxious, he was talking over the music and making people feel uncomfortable that were around him. Then he started saying some racist remarks which is when the bartender said, “OK, enough. Enough with this guy.”‘

In a Facebook post, the bar admitted that the bartender referenced the MAGA hat as a problem and that he should not have done so.

‘We would like everyone to know that we strive to remain completely apolitical and welcome customers with all beliefs and affiliations with the same first-rate level of customer service.

‘Jake’s Dilemma is not a place promoting any specific political ideology nor a place where we want anyone to feel unwelcome.

‘With all this in mind, we do fully acknowledge that one of our employees took it upon himself to wrongly promote his political views.

‘We can assure everyone that this employee has been disciplined and will be retrained before being allowed to serve at Jake’s Dilemma,’ they said.

Below is the full Facebook message the owner posted addressing the situation: 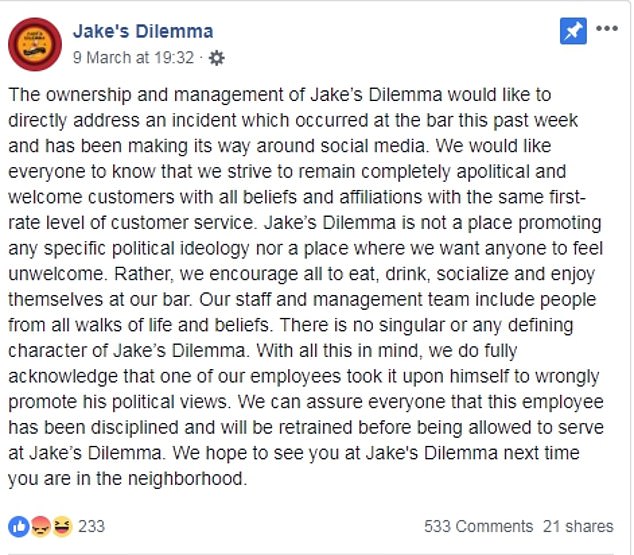 I’m inclined to take the owners word for all this. Cini is a MAGA provocateur who sounds like he’s gotten a little full of himself.