CNN is really having a great week. Don Lemon says he can’t be friends with his friends anymore, Brian Stelter was hoisted on his own network’s petard today, Jake Tapper surrendered his integrity to Twitter, and the official CNN PR account has descended to childish taunting.

First let’s talk about the Fat, Dumb, and Bald Guy.

Someday we're going to look back and wonder, why wasn't the president leading daily coronavirus task force briefings from the White House when the virus ripped across the country in late October of 2020?

You have to have read that and thought “what are you TALKING about, FDABG? Y’all could not WAIT for those to stop.”

And you’d be right. And not alone.

I love how the media gaslights us.

Remember when news networks stopped reporting the number of soldiers killed and wounded from 2009 to 2016? https://t.co/oFHlruDC1t 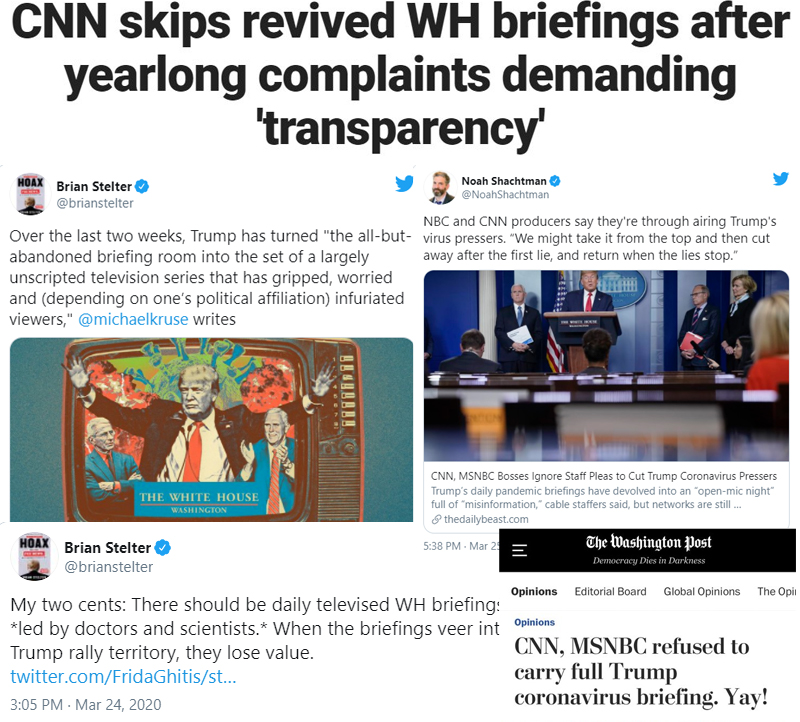 Actually Brian, we will not wonder — YOU called for the end of these briefings. https://t.co/pkR1UfAXMY pic.twitter.com/QWIu1nVt4x

Then there’s Don Lemon, who said last night that he’s getting rid of people.

“I have many people who I love in my life, and yeah I come from a red state. I’ve lived in several red states. There are a lot of friends who I had to really get rid of because they are so nonsensical when it comes to this issue,” said the courageous and put-upon Lemon. “Every single talking point that they hear on state TV, and that they hear from this president, they repeat it and they are blinded by it.”

“I had to get rid of them because they are too far gone,” said the poor, long-suffering man of principle.

“I try and I try and I try. They’ll say something really stupid and then I’ll show them the science and I’ll give them the information and they still repeat those talking points, and all the while the state was a hot spot,” he continued. “I just had to get rid of a lot of people in my life because sometimes you just have to let them go.”

So brave. I bet those folks are DEVASTATED

Twitchy caught Tapper’s collapse of the week. In previous weeks it has been his integrity and professionalism that have collapsed. This time around it’s his judgement, ethics, and morality.

2/ I asked a twitter exec if this was possible, he said yes and it would end the whole thing. Probably take 15 seconds.

3/ And yes twitter could end this immediately as well given that these rules are no longer rules. I’m just suggesting a possible way to end this. ✌️ pic.twitter.com/1ZfV8E45dS

He then realized this was backfiring and added some thoughts.

4/ Since the usual bad faith actors are now depicting this as me telling the NYPost to bow to twitter to delete the tweets, i'm clearly not saying that — i'm saying they can delete them *then tweet them out again.*

5/ I also don't think twitter should have blocked them to begin with. But this would be a way for NYPost to have cake and eat it too — and get its twitter feed back. Just an idea. Don't like it? That's fine too.

Nice mediation. You know what’s another simple thing to do? When a reporter is standing by the anonymity of their sources and even ends up in jail for contempt of court, one easy fix would be to just sell out that principle and give up the source. They could bitch about it later so it was clear they hated doing it. All better!

Just admit you were wrong (they weren’t) and we’ll let you back in. https://t.co/CrjWwkv9UY

UPDATE: Smooth move getting your feet wet right before the water drains out, Jake.

And finally, there’s CNN PR being super professional and journalistical.

Actress Kirstie Alley made tweeted about CNN’s high-stress, high-anxiety, daily disaster coverage. If you watch the network ever, you know what she’s talking about.

I now Know why my personal friends who walk around in SHEER TERROR of contracting Covid are simply CNN viewers! I decided to watch CNN myself to get a their viewpoint and oh my God DID I EVER!!!! IF YOU TOO WANT TO LIVE IN TERROR WATCH CNN!!
FEAR OF DYING IS THEIR MANTRA! OMG!

In response, this trusted news source decided to insult a highly successful show Alley starred in a million years ago.

Kirstie, you are welcome to change the channel – just like countless viewers did every time “Veronica’s Closet” came on TV. But don’t downplay the loss of nearly 230K American lives. And please, wear a mask.

Naturally, nobody got more personal gratifying pleasure from it than the Never Trump corps.

I would use 🔥 but this @CNN burn on @kirstiealley was pure solid nitrogen ice. https://t.co/b0OS5EXgDb

Literally the same guy who complains about Trump’s demeanor and attitude. Smart take Mr. Expert. Not hypocritical at all.

And there you go, that’s CNN’s end to the week.