Leftists at Facebook have just demonetized the Babylon Bee’s page over an article they claim incites violence. And this was after an appeal:

So after a manual review, Facebook says they stand by their decision to pull down this article and demonetize our page. I'm not kidding. They say this article "incites violence." It's literally a regurgitated joke from a Monty Python movie!https://t.co/U9B6tTOj6N

There is absolutely nothing in this article that incites violence. Here’s the full text of it: 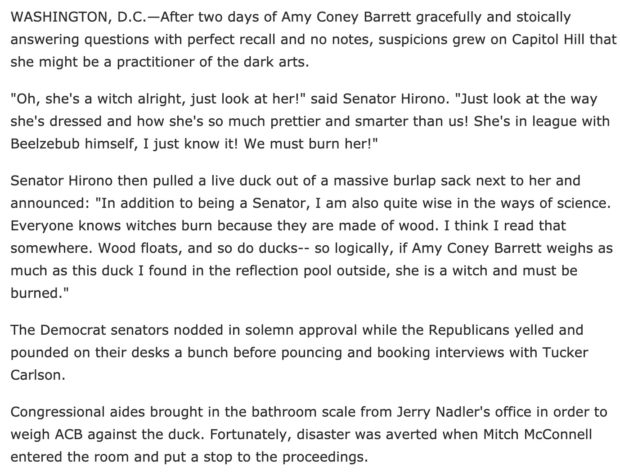 He’s right. It’s just a joke from a Monty Python movie. What kind of bullcrap excuse is this to demonetize their page?

In what universe does a fictional quote as part of an obvious joke constitute a genuine incitement to violence? How does context not come into play here? They're asking us to edit the article and not speak publicly about internal content reviews. Oops, did I just tweet this?

A Black Lives Matter leader said that if change doesn't happen, they'll "burn down this system." That's allowed on Facebook. You can quote it. You can link to it. But a Monty Python joke about burning a witch at the stake? That's incitement to violence. 🤡 show.

We will not be editing the article to get our page's monetization reinstated. We will, however, be talking to the media about this. Send your inquiries my way: [email protected]

Senator Hawley also weighed in on this:

.@Facebook now censoring the @TheBabylonBee and effectively kicking them off the Facebook network. For making a joke that called out Dems’ religious bigotry against #AmyConeyBarrett. The fix is in https://t.co/gqJKyJhGpv

In related news, it was reported by Politico that Lindsey Graham’s Judiciary Committee has delayed their vote on subpoenaing Facebook and Twitter CEOs until Thursday, which means the probably won’t be a hearing on Friday on all of this ridiculous censorship that’s going on.