Over the weekend I got a message from Facebook that they were “reducing distribution” of our page because they accuse us of posting ‘clickbait: “Your Page has some restrictions, including reduced distribution, because of repeated sharing of clickbait content.”

This is their explanation: 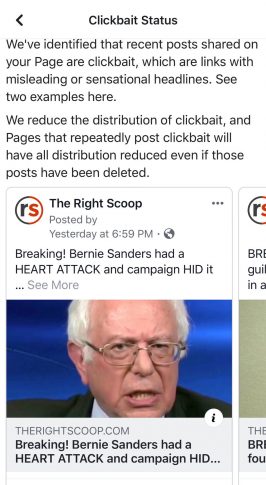 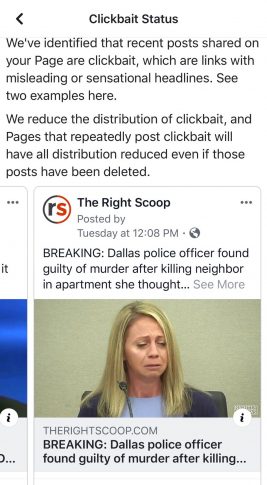 If you follow us on Facebook and aren’t seeing our posts any longer, now you know why.

None of those example headlines are misleading in the least. Yes, we do emphasize words with all-caps when something is important, but we don’t mislead people with our headlines.

In the second example, regarding the police officer, the only thing capitalized is BREAKING, because it was a breaking story. And yet they call that clickbait? It makes zero sense.

This is the first violation Facebook has ever issued The Right Scoop and I’ve been using Facebook for years. It honestly feels like an attack on us because 2020 is right around the corner and we support Trump. Like the New York Times, Facebook is probably cracking down on blogs like ours to ensure that we have little influence in the next election. I’m sure they’ll justify it with their nonsense clickbait rules and what not, but I’m betting that plenty of others on the left that won’t be targeted. There’s been such a growing distrust of Big Tech, as you’ve well seen, and thus it is simply hard to believe this was done in good faith.

Now we are on the receiving end of being targeted by Facebook and I’m sure it will have some effect on our traffic, again. We used to get a ton more traffic on Facebook than we do now, but this is the first time Facebook has ever told us they were throttling us.

Google has also recently changed their rules regarding the kinds of articles they allow their ads to be attached on and it wouldn’t surprise me if they come up with a reason to boot us from their ad network. Hopefully that won’t happen and I pray it won’t.

This is why we created a donation page a few months ago because it’s become harder and harder to get the word out on social media. I hate asking for donations because I don’t want to burden people who come to The Right Scoop, and I’ve resisted it for years even though good people have offered to donate because they love the site. But unfortunately this is where we are now, as it’s getting harder and harder survive in a liberal Big Tech world.

UPDATE: I should add that the penalty for this new violation is 14 days and then I can request a review. But honestly, I don’t know what difference it will make because our headlines are not clickbait.