The so-called fact checker at USA Today who told everyone that it was some big right wing conspiracy, and no Joe Biden wasn’t checking his watch during the arrival of the fallen Marines – killed by his own failed exit strategy – as people were claiming was forced by the facts and actual video of the thing happening to correct his own fact check.

That jerk, Daniel Funke, then demanded sympathy for the poor hard working plight of journalists just trying to do their darn tootinest best. No seriously. And THEN his fellow activists posing as fact-checker chimed in to praise him as heroic. NO SERIOUSLY.

You remember the original story we’re sure. The “fact-check” treated it as a crazy conspiracy theory being floated right wingers. 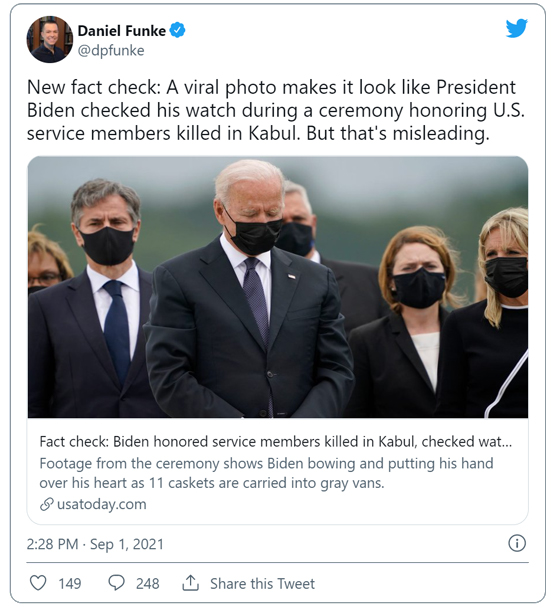 But OOPS someone didn’t watch the video. And he had to issue a correction.

As many of you already know, this story has been corrected. Biden checked his watch multiple times during the ceremony. I regret the error. https://t.co/F6bjQFYVbC

You regret the “error”? That was the SUM TOTAL of the fact-check. You were saying that it was FALSE and a conspiracy, and they let you keep the rating as a fact check. Now it says “lacking context.”

YOUR ENTIRE STORY WAS FALSE. NO RETRACTION. But still, somehow HE is the victim, and the plea for sympathy, embedded for your convenience in clicking and mocking, followed quickly.

It's easy to dunk on journalists when we get things wrong. I get it – to many, we're just another name on a screen. But behind that screen is a person trying to do their best.

None of you wants to fact-check Biden in the first place, and most, like CNN’s Daniel Dale, actively fact check his opponents and critics instead of fact-checking the administration. They’re running a Biden rapid response team.

I liked this response:

You didn't get something wrong. You purposefully and willfully fact checked Gold Star families instead of the President. You did exactly what you think you're paid to do, which is protect Jos Biden and his party. https://t.co/jFBouua44Z

But not this one:

Corrections are the hallmark of an exceptional journalist. Corrective action in a newsroom shows readers that they can trust that organization. Anyone who dunks on that needs a hug and a nap.

Sympathy and praise for the guy whose instinct was to fact check the grieving parents, not the watch-checking president.