This morning on Fareed Zakaria’s show, he really dismantled Bernie Sanders on his irrational mantra about how socialism is wonderful in Europe and we need to be more like them. It’s really really good, and worth watching and sharing:

I’m gonna document some of the numbers because I think he did an absolutely great job of showing why Bernie is completely wrong because he’s hopelessly out of date on his socialist propaganda.

Zakaria points out that Bernie says that billionaires shouldn’t exist at all. Well, there are more billionaires in Sweden and Norway as a function of the population than in the U.S.:

So, they’re pretty terrible right? Then why does he want us to be more like them?

Next, he shows that Sweden tried out Bernie’s model in the seventies. Between 1962 and 1982, they dramatically increased the share of the GDP, the gross domestic product, that they spend on government spending, beginning at below 25 percent to above 50 percent:

Economists point out that in the period where the government spent a lot more, they didn’t add a SINGLE JOB to the economy:

Now look, there’s plenty of economic arguments to be had here, but Bernie pretends that the economy would be fine if the government started spending a crapload more on the social safety net, and pointing to Europe to prove it just doesn’t hold up.

Next, he shows that although they have a generous social safety net, a ton of the taxes that pay for it fall on the middle class and the poor: 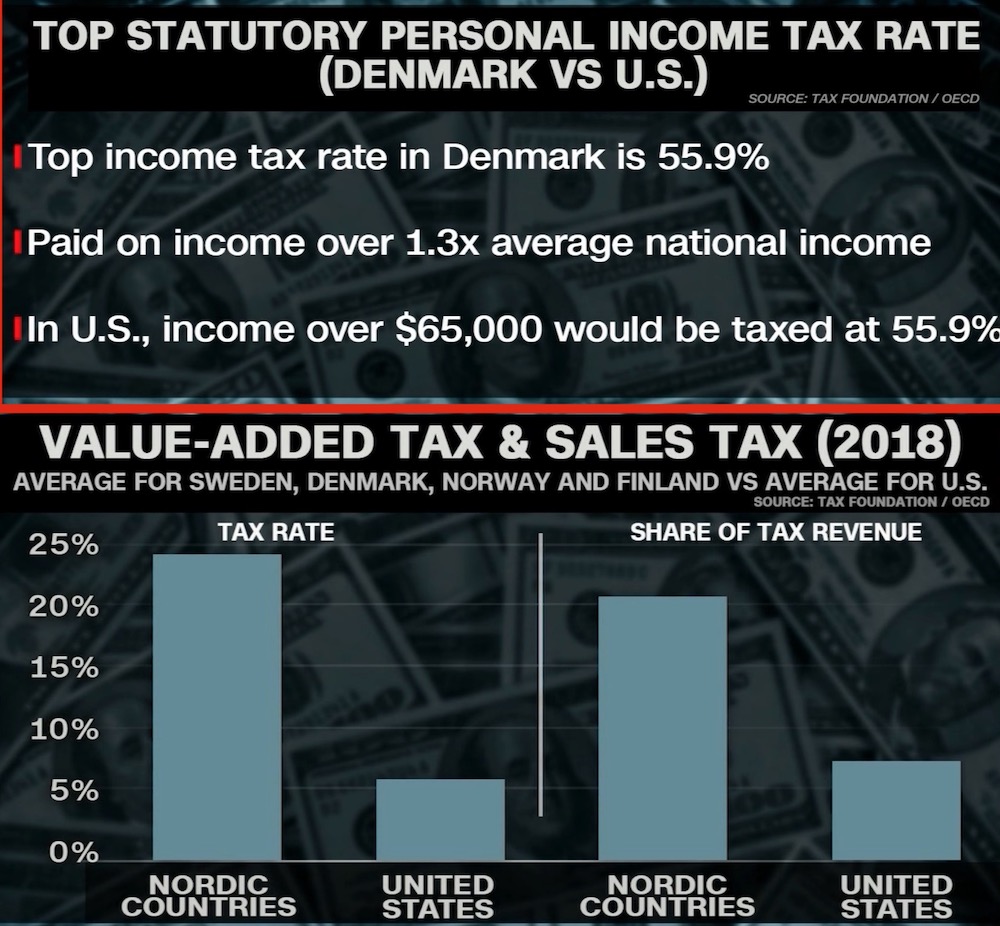 SO, if we instituted what Denmark has done in taxes in order to pay for the welfare state, every income over $65,000 would be taxed at an incredible 55.9% rate. Now, the average family income is about $60,000 a year. So you’re not talking about just the wealthy, you’re talking about most of the middle class being hit really hard by taxes.

The second graph shows that in ADDITION to that, the nordic countries have a VAT tax, which some politicians have called for in the U.S. too! The problem with VAT is that it does not differentiate between the wealthy and the poor, so it hits every single product the poor spend money on. Sales tax works the same way, and it’s already regressive. So you’d have to go from about a 6% regressive sales tax all the way to a nearly 25% regressive VAT tax.

Zakaria finishes up with a last graph showing just how progressive the U.S. tax structure is compared to that of Denmark and Sweden – it’s way worse in the U.S. already, even though morons like Bernie and AOC would have you think otherwise:

SO, Zakaria concludes that IF Bernie actually wants something like what the nordic countries have, he’d have to be open to greater labor mobility, more free markets, more access to global markets, while taxing the middle class and the poor way more than we do now. Now, if that’s what he wants, he should be honest about it. But he’s not.

We have a social safety net here, and it’s mostly paid for by the wealthy. If we want to change that, it’s absolutely insane to act as if you can do it by simply raising taxes on the wealthy. It just can’t happen.