The FBI is contacting users of a so-called right-wing dating app called ‘The Right Stuff’ after they answer a specific question.

According to reviews in Apple’s App Store, users are complaining about getting a call from an FBI agent when they answer a profile question “January 6 was…”

Users of a right-wing dating app founded by former Trump staffers have reported that they’re receiving calls from the FBI after answering one particular question in their dating profiles.

The app in question — The Right Stuff — has already been dubbed a failure after next to no women signed up and the app’s invite-only system made it almost impossible to join.

But now, a third complaint is emerging from users — that answering a profile prompt question that asked “January 6 was …” has led to them being contacted by law enforcement. 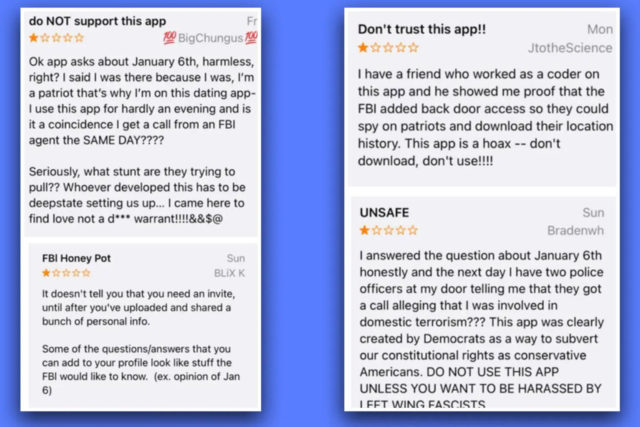 “App asks about January 6th … I said I was there because I was, I’m a patriot … I get a call from an FBI agent the SAME DAY????,” reads one review.

“Seriously, what stunt are they trying to pull? Whoever developed this has to be deepstate setting us up … I came here to find love, not a damn warrant.”

Another wrote, “I answered the question about January 6th honestly and the next day I had two police officers at my door telling me that they got a call alleging that I was involved in domestic terrorism???

“Do not use this app unless you want to be harassed by left-wing fascists.”

Yet another commented, “I have a friend who worked as a coder on this app and he showed me proof that the FBI added backdoor access.”

It’s really unbelievable how far the FBI has fallen in recent years. They are clearly a leftist organization obsessed with whatever the left thinks is important.

According to Tom Elliot, “The @FBI is basically the Democratic Party’s secret police.” Absolutely.